Be a Bluenatic: New offer from the Blues.

Share All sharing options for: Be a Bluenatic: New offer from the Blues.

At Duke they have the Cameron Crazies. Mizzou has The Antlers. The Cleveland Browns' Dog Pound has long been revered and feared. All of these fan sections are packed with crazy fans who will do anything to pump up the crowd and the team they are supporting.

A few tears ago, inspired by the raucous crowds that packed the rink for the Frozen Four here in St. Louis, the Blues toyed with bringing in the SLU Pep Band to help pump up the crowd for certain games. It was an interesting idea, but it had mixed results.

Now, spearheaded by a couple of the ticket Account Execs in the Blues' front office, I think they've finally hit on an idea that incorporates the idea of packing one section full of 150-200 crazy Blues fans who will be expected to stand, scream, chant and otherwise act like complete lunatics throughout the game. There are a few reasons why I think this idea is set up better to succeed, including:

Here's the long and the short of it: I love this idea. As I told the guys who put it together, I'm probably not the right guy to be in this section. As people who have sat next to me can attest, too often I go nearly catatonic as I watch the game - too focused to be social, let alone a screaming maniac. But I know those people are out there and I'd love to have a section like this in our rink. 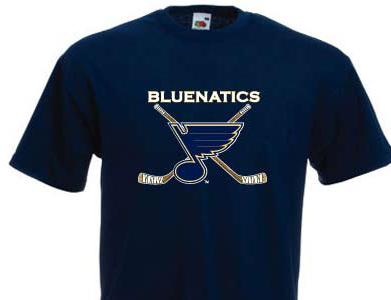 If this section catches on and works, this could be the only group like it in the NHL. If they can be creative enough and fun enough, they can create a whole atmosphere in the rink during games that just doen't exist right now. As a Mizzou guy, I loved watching the Antlers going crazy throughout games. I'd love to see the same thing happen here at our games.

You may be asking why I'm supporting this, as I don't tend to get pulled in by these team-sponsored type of promotions. For starters, as I mentioned above, I really love this idea. I'm probably not the right guy for the job, but I hope a bunch of you are. Second, one of the guys behind this is my season ticket rep and I think this guy has really got his finger on the pulse of what fans want at the games and has a seriously great idea for helping to create a home-ice advantage for our team. Clearly they could use it.

The first game that this program will be in effect is March 7 against the Blue Jackets. Let's make this thing go. Here are three easy steps:

And just in case your spider sense is tingling, I'm not getting any kind of kickback for posting this or for your participation.

What do you say, Game Time people? Ready to be a Bluenatic?