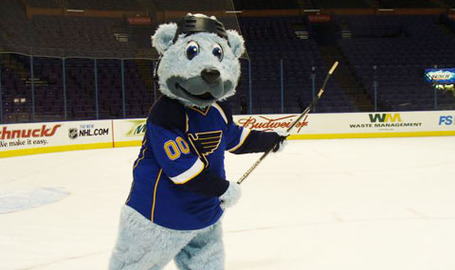 First Eric Brewer, then Jay McClement and Erik Johnson; most recently Brad Boyes. Hopefully there's a contender out there that need a mascot sans trousers.

While another thunderstorm blew through St. Louis last night, the Blues traded Brad Boyes to Buffalo for a 2nd round pick in this year's draft. That gives the Blues five picks in the first three rounds of the draft.

According to FSN Midwest's Darren Pang, Barret Jackman just realized that he indeed does have a complete no-trade clause and he won't be going anywhere. Pang Chung also said this morning on TSN that Doug Armstrong doesn't expect much and that as of now all is quiet with the Blues.

Much like last night's third period, expect there to be plenty of activity involving the Blues, but with nothing going all the way through and the Blues having a zero in their column at the 2:00 Central Time deadline.

In the name of shameless self promotion, I'll be on with Rob and BJ Rains on 1380 AM (sportsradio1380.com) in the 1:00 hour talking about the trade deadline.

Use this as your GDT, or TDT, and we'll keep up as best we can with anything that happens.

Trade updates, re-signings, and witty banter after the jump.

As of 1:55 Central Time, eight  trades have been made; two of them involve former Blues, one former Blue first round pick has been traded too.

Zenon Konopka is now a Duck.
The Ducks' 2nd round pick this year is now property of the Islanders.

Dennis Wideman goes from Florida to Washington for F Jake Hauswirth and a 3rd round pick.

Jimmy Howard re-ups with Detroit for two seasons at $2.25 million/season.

Ottawa gives D Chris Campoli to Chicago for Ryan Potulny and a 2nd round pick- Campoli for Potulny. Hey that almost rhymes!!!

As posted by PCS, Dustin Penner is now a King, in exchange, the Oilers get D Colten Teubert, a 1st round pick this year, and a 3rd round pick next season.

The other big seller besides the Blues and Ottawa  this season, the Florida Panthers, send D Bryan Allen to Carolina for LW Sergei Samsonov.

Toronto sends John "Maverick" Mitchell, to the Rangers for a 7th round pick.

TSN's Bob McKenzie is reporting that New Jersey's Jason Arnott is waiving his no-trade to go to Washington. The Capitals get David Steckel for him.

Calgary gets Fredrik Modin from Atlanta

The dispersal of the Florida Panthers continues, with Chris Higgins going to Vancouver. From Miami to Vancouver...that's the longest trade of the day