Share All sharing options for: Brad Winchester dealt to Anaheim 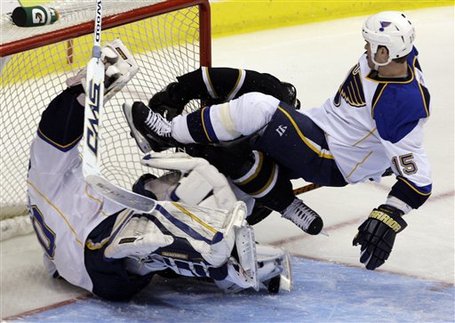 On a less than star-studded trade deadline day, the Blues have added to the list of deals that really won't matter in the long-run by trading Brad Winchester to Anaheim in exchange for a third round pick.
Jeremy Rutherford of the Post-Dispatch has clarified the trade and noted that the third round pick is in next year's draft. Ryan Reeves was not included in the deal.

An unrestricted free agent after this season, Winchester became expendable because frankly, anything that isn't screwed down to the floor is expendable these days. The Blues pick gives the Blues two picks in the third round of the 2012 draft.
To sum this trade up in one sentence, the Blues weren't going to win the Stanley Cup with Brad Winchester on the team, and Anaheim isn't going to either. This trade is addition by subtraction in my book.
Comment, swear, and say Car, RamRod below.