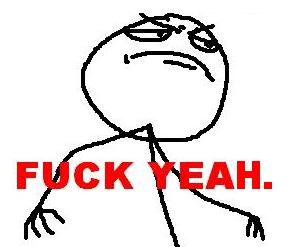 What an amazing day of hockey yesterday. Three playoff games decided by one goal in the third period. Fuck yeah.

I've probably watched this video 1000 times because it's that awesome. Best intro/hype video in all of sports. I know most of you have seen it already, but it needs to be watched again. Polar Bear Top Gun. Fuck yeah.

Send me some links. Fuck yeah.