Share All sharing options for: Tuesdays With Hildy: With NHL 12 Being Released Today, What's Your Favorite Ice Hockey Game?

I'm a video gamer. Generally, I prefer sports and good old fashioned side scrollers - a throwback to my NES days. Thankfully, EA Sports' NHL series are the best sports games out there. Of course, they've been going on since NHLPA '93 (ahhh, a lack of league licensing rights - good times), which makes them one of the longest running franchises in video games today.

Of course, the EA series isn't the only game that's populated video game consoles.  You have to go aaaaall the way back to Intellivision to get NHL Hockey, which was released in 1980. The Atari 2600 also had Ice Hockey, which presumably wound up more like Ice Pong than anything else. Also, according to the box art, it involved magical rainbows: 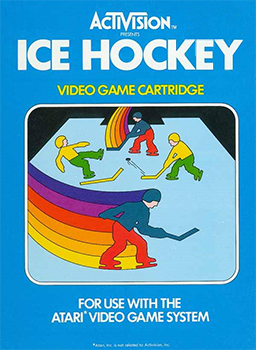 The more well-known games came out in 1988. Blades of Steel, by Konami, had the superior graphics, gameplay, and the correct number of players on each team. It also had some cracked out penalties, such as only the loser from a fight getting sent to the box. Also released in 1988 was Nintendo's Ice Hockey, which had no basis in reality at all but did give us three beloved characters: Fat, Thin, and Medium: 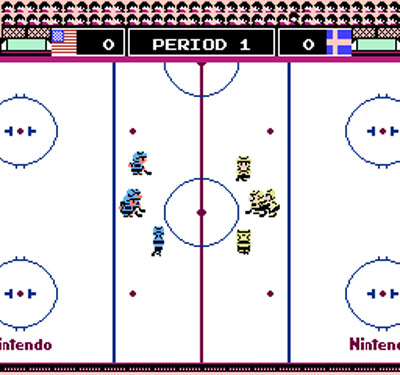 Hockey video games really didn't start getting awesome until the Genesis and NES. Heck, even our very own Brett Hull got into the act: 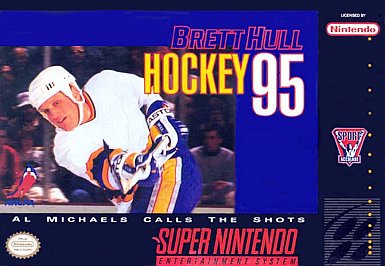 Wait. Where's the Bluenote? Oh, that's right! Another NHLPA- only game. Have no fear! NHL Stanley Cup had NHL licensing, but no NHLPA. If you smush them together, you have a pretty decent hockey game with oddly confusing graphics that tried to take advantage of the SNES' 16 bit technology. They both kind of look like Starfox on Ice.

NHL 94 is a game that has developed a cult following, and for a reason. It's the first actual hockey game for the SNES and Genesis to feature the whole shebang: players, teams, and - for the Genesis - blood. Also, it has that obnoxious little kid that'd come up and bang on the glass for no reason at all, which was a nice touch as we all know that kid exists. There're countless downloads and game mods out there for SNES ROMs, some of which plug in recent squads that you can play as. These people have no lives, but the results of this lack of life is awesome.

NHL '98 (my personal favorite) was the final game released for a 16 bit system. NHL '99, which featured only a mildly concussed Eric Lindros on the cover, also featured the Nashville Predators for their inaugural season.

EA's games have improved over the years and have basically forced 2KSports' games off of the PS3 and Xbox 360 completely due to the fact that EA is awesome and 2K tends to be terrible. The players look like zombies and the play's sluggish. Heck, the games're so bad that 2K even decided to quit, not making one for the Wii this season. They even failed at an iPhone game.

I know I left quite a few off. What games are your favorites? Discuss the merits, and tricks you've used to blow Chicago out of the water. Also, has anyone made Jeremy Roenick's head bleed?