The NHL Department Of Player Safety Is A Joke

Share All sharing options for: The NHL Department Of Player Safety Is A Joke 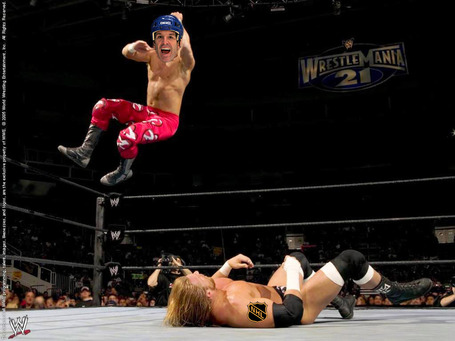 When the hell is the NHL going to put an actual person in their Department of Player Safety who doesn’t have any emotional ties to any players or teams in their league? No offense to Brendan Shanahan, who was one of the baddest power forwards in league history, but I’m sick of watching the Ringling Brothers and Barnum and Bailey Circus of Inconsistent Bullshit.

Case in point, Wednesday night. At the end of the Detroit/Nashville game, Predators defenseman Shea Weber grabbed Wings forward Henrik Zetterberg by the back of the head and slammed his face into the glass. Granted, I hate the fucking Red Wings as much as anyone because any time they have a play like this occur, they drop to the ice like they’ve been shot with a double barrel shotgun. Regardless, it was a chicken shit play on Weber’s part and has no place in the game.

I was expecting to hear yesterday that Weber was going to get at least a three-game suspension and possibly more, but I got something I never expected. Shanahan levied one of the fiercest penalties in the history of the National Hockey League……a $2,500 fine. Weber, who mind you, has already been fined previously this year for a hit on Vancouver Canucks forward Jannik Hansen back in October, must have been trying like hell not to laugh his ass off when this justice was brought down on him from the league office.

Meanwhile up in Canada, Vancouver Canucks forward Byron Bitz got a two-game suspension handed down from Shanahan for boarding Kings forward Kyle Clifford during their Game 1 matchup on Wednesday night. So tell me how a guy who deliberately grabs a guy by the back of his head and slams his face into the glass gets a $2,500 fine while another player boards a guy on a play that isn't as violent as the Weber play and gets suspended?

Is it due to Bitz being a "scrub" player that Shanahan feels won't be missed on the ice as much as Weber would be for the Predators? It's the shit like this that makes me wonder how much of a clue Gary Bettman actually has when it comes to his sport because it certainly looks like Shanahan let the star player off lightly while the "no namer" got the shaft. Something tells me if Weber had actually decapitated Zetterberg and played soccer with Hank's head, Shahahan still would have only fined him.

Now this isn’t a case of a Blues fan screaming bloody conspiracy, but it pisses me off that Chris Stewart got a three-game suspension earlier this year for hitting Nik Kronwall from behind back in October, and Ian Cole got a three-gamer as well for a hit on Wings forward Justin Abdelkader in December. If you are going to bring down penalties, be consistent for crissakes. Weber deliberately grabbed Zetterberg’s head and rammed his head into the glass like it was a WWE turnbuckle. The only thing missing was for Weber to tear off his Preds jersey and start posing for the crowd ala Hulk Hogan.

The Stewart and Cole plays weren’t close to the Weber crap and they had to sit for three games. In my opinion, the problem is that Mike Babcock has threatened to plow the officials with his two inch dick for so long and gotten calls to go his way because of it, that the Red Wings have gotten the reputation as a team that can swing the tide of a game due to officiating.

The issue with that is because of Shanahan’s previous relationship with the Red Wings, he feels he has to show he isn’t favoring them by bringing down some bullshit fine on Weber when in reality, Weber’s ass should be sitting for at least the next three games. You can't pick and choose who you are going to suspend because you feel that one player is more important or in Bitz's case, less important to a team. Way too many times it seems the league makes up bullshit rules on the fly to cover their ass because they don't have a freaking clue themselves.

Hey NHL, your fan base is actually quite intelligent. If you piss on their leg and tell them it's raining, they will actually tell you it is still piss. If Shanahan can’t bring himself to grow a pair and do the right thing and suspend Weber for a play like this because he‘s worried about how he will be viewed, then get someone in the position who will.