A Follow Up To The Open Letter To Chris Stewart 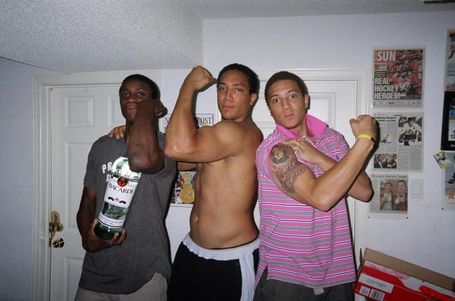 Last week, I wrote you a letter which I hoped would inspire you. Apparently it inspired you as much as me seeing Richard Simmons in a thong. Look man, like I said last week, the Blues brought you over here to score goals; not to do the Ameren UE power play dance after Blues victories. You know how to put the puck in the net, so enough skating around like a chicken with your head cut off. I applaud you for saying your effort wasn't up to snuff after game 1 and manning up after Ken Hitchcock scratched you for game 2.

Enough talk Chris. Go out and let your skill do the talking. The Blues need more from you than 1 shot on goal. They need you to be a one man wrecking crew. When the Blues traded for you last year, I had to change my sheets because I was so excited over the prospect of you playing for the Blues as opposed to against them.. Do the Blues have to bring in Isuro Tanaka of Major League 2 fame into the locker room and tell you have no "marbles" to light a fire under your ass? It begins tonight. Find the chip that you had on your shoulder when you were traded from Colorado and be the player that everyone knows you can be. Find your marbles.