Do The Blues Have A Former Wrestling Manager As Head Coach?

Share All sharing options for: Do The Blues Have A Former Wrestling Manager As Head Coach?

A few weeks ago, I was at a friend's house watching the Columbus Blue Jackets drubbing of the Blues on home ice. As we were sitting there watching Bernie Federko interview a pissed off Ken Hitchcock in between whistles, my friend asked me if I thought Hitchcock looked like former WWE manager Paul Bearer. 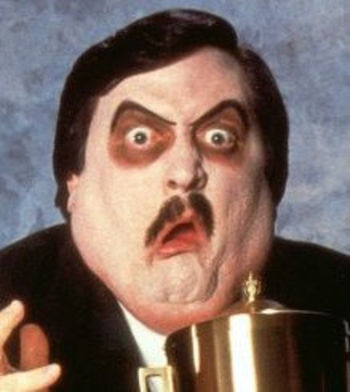 It is uncanny how much he does resemble the Undertaker's valet. Dye the guy's hair black, grow back the mustache and make the funny faces...and suddenly the Blues would have the most entertaining head coach in the league.

The possibilities are endless. He could lead the team out on the ice holding a miniature replica of the Stanley Cup while David Backes walks slowly through the tunnel with the funeral music in the background.

After every goal, Blues public address announcer Tom Calhoun could hand the mic over to Hitchcock so he could give Paul Bearer's signature "Ohhhh yeeesssssssss!"

The Scottrade could be re-named "The Funeral Home."

After each Blues victory, Hitch could wheel a coffin out on the ice and place the jersey of the team the Blues just defeated into it and then roll it off the ice with the ominous music playing over the loud speakers.

Instead of the Taco Bell "ringer", you could have the Kutis Funeral Home "cremation of the game" where a big hit gets recognized by Darren Pang.

Instead of playing that god forsaken Cotton Eyed Joe (which seems to be the St. Louis hoosier's version of the Macarena by the way), you could replace it with Michael Jackson's Thriller and have peeps standing on the platforms in the upper bowl of the Scottrade doing that goofy Thriller dance.

When (none of this "if" b.s.) the Blues win the Cup, Hitch could drive down Market in a hearse with the Cup in the back of it. In the words of Tony Clifton, "that's humor."