You Got That Right: The Breakdown Of Commercials On Blues Telecasts

Share All sharing options for: You Got That Right: The Breakdown Of Commercials On Blues Telecasts 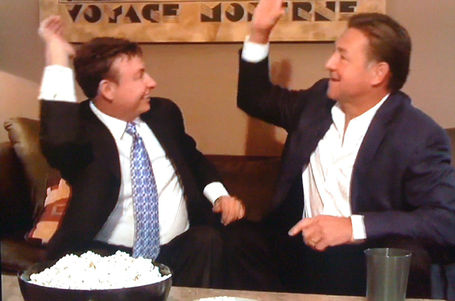 I pay way more attention to television commercials than I think is healthy for the average American human. Maybe that's because I watch more television than the average American human. My friends always look at me with blank stares when I start talking about commercials that annoy the living hell out of me. They tell me that they fast forward through them. I, on the other hand, like to watch them so I can rant and rave about them. The commercials that play during Blues telecasts are perfect ranting and raving fodder. Let's take a look at the ones that made the cut:

1. The Bud Light commercial starring Pitbull. First off, who the hell is Pitbull? Every time I have asked this question, I am met with "he's a rapper". Yeah I can see that Einstein but who in the blue hell said this guy SHOULD BE a rapper? I seriously get ill when I see this Jason Kidd look-alike casing the club like he's trying to find a hot chick so he can slip a roofie in her drink. And what is "dah"? Listen douchebag, there's a reason why you are sitting in a corner by yourself at the club. Yelling "dah" at a random passerby isn't going to get you love up in the club. And to the supporters, please don't bombard me with messages to inform me what he really said. I don't give a rat's fat ass. If there's anyone that deserves to be disemboweled with a wooden cooking spoon, it's the guy who walks around the club while donning a pair of sunglasses. Corey Hart (not the Milwaukee Brewers outfielder) got away with that crap because he didn't know any better in 1983. People were allowed to get away with being douchebags back then.

2. Any Ray Vinson commercial. When Vinson first started the Borat high fiving with Bernie Federko a few years ago, I thought to myself that it was the corniest thing I had ever seen. (A side note...who the hell watches sporting events at home wearing a freaking suit?) If it had just stopped there, I would have been okay with it. Now, we have to endure not only the high fiving with Bernie, but now we have Vinson's son playing grab ass with Federko. And why do we need to see the bloopers? I really don't care if Shawn can't figure out which hand to high five his dad with. I honestly think the commercial would be more humorous if after the tag line of "you got that right" is uttered, Ray and Shawn both start doing the armpit farting noises. Ray, one more thing to add...you've made a killing in the mortgage business. Is there a reason why you couldn't afford to pay a real authentic Dominican to play the role of Albert Pujols when he's walking away in your "great things don't last forever" spot? Every time I see the Pujols impostor walk away, all I can think of is the Rodney Dangerfield line from Caddyshack, "Hey Whitey! Where's your hat?"

3. The Taco Bell road trip commercial. This one pisses me off to no end. Four deadbeats pile up into mom's Volvo and make a supposed 965 mile trek to buy some Taco Supreme with a shell made with REAL nacho cheese Doritos because apparently they were only selling them in a few cities. Gas is at almost 4 dollars a gallon, and these assclowns are driving cross country for tacos? So basically these idiots drove 965 miles and spent about $300 dollars on fuel so they could crop dust each other in a Volvo for about 14 hours while taking some insanely smelly dumps. Can you imagine the conversation that took place at home when this dipshit told his mom he was taking a road trip to buy some tacos?

Deadbeat driver: "Hey mom, me and some of my friends are driving 965 miles to buy some tacos. By the way, I'm using your car."

Mom: "Uh..Matt, have you found a job yet? You've been out of school for a year now and all I see you do is play XBOX all day and make bongs out of Legos."

4. The Dobbs commercials. I get that Dobbs wants people to know that they give great service, but there's a difference between giving great service and being an annoying pain in the ass. If I saw some fat bearded guy and some little skinny 12 year old looking runt fighting in the Dobbs garage over whether Dobbs has the best prices on service or tires, I'd be telling the service writer up front to have them pull my car out of the garage. And let's not forget the fat bearded guy who does that weird looking crap with his hands over his head. Look pal, just fix my car. I don't need the funny gestures like you are trying to sign to me. Since you are so big on hand gestures, here's my one finger gesture to let you know how I think you are number one. Now fix my damn car. Finally, we have the one Dobbs jackass who has to tell the customer where every Dobbs is located. Hey jackass, I asked where the Dobbs in Creve Coeur was, not where the Dobbs in Crystal City, DeSoto, and Herculaneum was located.

Honorable mention: The Flex Seal commercial. I know this one doesn't air during Blues telecasts, but it's still worthy of a rant. Every time I see the goofy looking bastard pretending to row the boat "suposedly" in the middle of the lake after they replaced the bottom of the boat with a screen door and covered it with Flex Seal, I want to beat the guy's ass with his boat oar. First off, who the hell rips off the bottom of a boat and replaces it with a screen door? Not even my relatives in Festus are stupid enough to do that. As Morgan Freeman said in the movie Lean On Me, "You're trying to con a con man." If only they had Flex Seal in 1912, maybe the Titanic would have had a different fate. Too soon? See, I told you I watched too much television.