How Bored Was I? Bored Enough To Watch The Mighty Ducks 1 AND 2

Share All sharing options for: How Bored Was I? Bored Enough To Watch The Mighty Ducks 1 AND 2 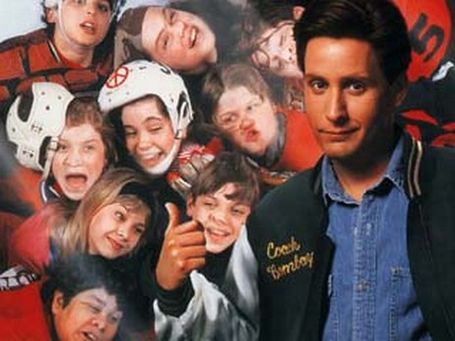 If TBS needed filler at 3 am on a Saturday morning and D3 and Over The Top were the last two movies remaining on Earth, TBS would run Over The Top. It’s marginally better than D3, though that’s like saying suffocation is mildly more amusing than drowning. Plus any movie with Robert Loggia in it will trump the 8 pounds of monkey crap in a 5 pound bag that is D3.

It's amazing to see that as you get older, the stuff you thought was good or cool when you were younger actually sucks now. For example, when I was a young lad, I thought the Dukes Of Hazzard was the greatest show of all time with Too Close For Comfort a close second. When CMT brought it back about 10 years ago, I couldn't believe how bad DOH actually was. It was basically like watching home movies from my relatives in Festus.

This brings me to my analysis of the two Mighty Ducks movies. Disney movies or not, the inconsistencies, the glaring errors, and strange behavior must be broken down. If this isn't done, then my friends, the terrorists have won. And don't ask me what I'll be doing when the Blues and Kings will only play twice in six days in Los Angeles.

Let's start off with the Flying V. In MD1, the Los Angeles Kings great broadcaster Bob Miller is broadcasting Pee Wee hockey games. Why the hell an NHL broadcaster has to resort to calling Pee Wee hockey games is lost on me, but that's another story for another day. I guess the Kings didn't have that much money to pay Miller since they were paying Wayne Gretzky a shitload of money and team owner Bruce McNall was bankrupting the team. As the Ducks proceed to run the Flying V, Miller says that the Ducks are running it as if he is an expert on the subject. In D2, the Ducks run the Flying V again. This time, Miller says "They form a v! I've heard of this before, but I've never seen it." Yeah you did Bob. You saw it in the first movie for the love of the creepy guy who owned and lived above the bike shop in Diff'rent Strokes.

Next, let's talk about how some of these kids should have never made the team in the first place. Where do you begin? I will start off with the goalie named Goldberg. He reminds of me of when the Blues signed Grant Fuhr in 1995 and all the whispers were how he was fat and out of shape. Only Goldberg didn't play like Grant Fuhr. Possibly the worst goalie this side of Jim Hrivnak.

Next we have Luis Mendoza, the kid in D2 who had Pavel Bure speed but didn't know how to stop once he got started. This guy shouldn't even have been allowed to have a seat in the press box as a healthy scratch. That's how bad he was. And please don't get me started on Ken Wu. This dumb little bastard would try and figure skate and do all kinds of crazy spinning in order to try and split the defense. Nothing made me laugh more than when he tried that ridiculous maneuver and got drilled by two opposing Iceland defensemen. Horrible player.

Finally you have Kenan Thompson of SNL fame. If it wasn't for the movie Good Burger, I would grill him to no end. When he said "It's knucklepuck time," I wanted to see Tim McCracken come out of nowhere and do some major surgery on him. Open heart.

On to the hockey. We have all said how bad the officiating has been in this year's playoffs. Folks, the officiating in the Ducks movies was worse. Especially in D2. During the big game with Iceland, I counted about 20 cross checking penalties, 10 roughing penalties, a couple of slashing and tripping and a host of others. And let's not forget the ugly Fulton Reed kid and the other goon enforcer who actually hold hands to clothesline an opposing player while he's skating with the puck. Something tells me if Brendan Shanahan was the the head disciplinarian in D2, he probably would have given these two assholes a $1 fine.

And why was Kenan Thompson allowed as the goalie to skate past center ice to shoot the puck? Total bullshit. He should have been assessed a two minute minor. Back to the Fulton Reed kid. Without a doubt, he has to be the ugliest character in movie history next to the Rocky Dennis character that Eric Stoltz played in Mask. I once showed a picture of the Fulton Reed kid to my dog and a family of fleas scurried off the dog.

Did Emilio Estevez actually do any coaching in these movies? Yeah he was behind the bench, but most of the time he was either quacking or playing a duck kazoo. When he wasn't doing that, he was trying to put the moves on Joshua Jackson's mom in the first movie and the broad who played the tutor in the second movie who also played Richard Dreyfuss's daughter in What About Bob? What they should have done was eliminate the Gordon Bombay character altogether and give these kids some real life experiences. What I would have liked to have seen is some tea with Ms. McGill for all you Youngblood fans out there.