Another Prediction For The Kings: Albert Pujols

Share All sharing options for: Another Prediction For The Kings: Albert Pujols

Yesterday, we had some celebrities and experts make predictions about the upcoming second round series between the Blues and Kings. You know, if we knew any celebrities (Jon Hamm, email me). Well today with help from our friends at Joe Sports Fan, we've unearthed a real gem of a prediction.

As you might know, the St. Louis Cardinals were unable to re-sign a certain free agent infielder who won two World Series titles here in the Gateway City. And instead of staying, he chose more money to go to Southern California to play for the Los Angeles Angels of Anaheim.

Now I don't remember him ever attending a Blues game during his St. Louis career, but who knows, maybe he's a closet hockey fan. And just because his team plays in Anaheim, maybe he doesn't like the Ducks. Maybe his fandom is more royal in nature. 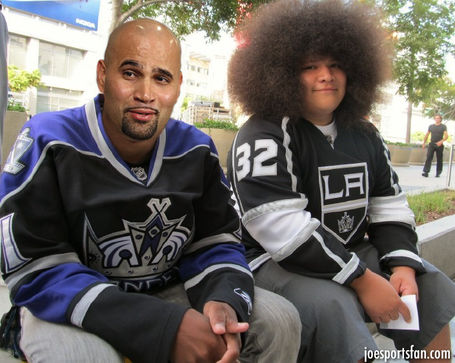 Uh, Pujols is the guy on the left. But the guy on the right makes me giggle just as much. So now that we have this photo, obviously giving St. Louis sports fans another kick to the groin (I bet he hopes the Rams move to L.A. too!), we can't let this go without further comment.

9. I look amused because this bench we're sitting on is electrified. His hair was braided two seconds ago.

7. I put this jersey on and someone call me Gran Uno, but everyone know there only one Great One with the Kings.

6. I'm pretty sure I look just like Snoop Dog. Snoop A Loop!

5. I bet everyone wants to be seen at the hockey game in L.A., right?

4. I'm just a fan of science. It's a modern marvel to play hockey in California.

3. I tucked the tags in the back. I'm returning this sucker as soon as they lose to the Blues.

2. I went to a figure skating show and a hockey game broke out. Am I right?

Got any other suggestions? Leave them in the comments.

And a HUGE hat tip to Matt Sebek of Joe Sports Fan (follow him on Twitter, one of the best out there) for the image. he is a PhotoShop maestro. The guys at JSF are doing a weekly St. Louis-centric podcast. Last Friday's installment has plenty of Blues references and is even the called the Rick Zombo edition. No, really. And they have an interview with Ray Vinson. No, really. Check it out.