Share All sharing options for: Official Explanation on Dwight King's Hit On Alex Pietrangelo Leaves Something To Be Desired

If you look up "weak sauce" in the Urban Dictionary (please don't - this is entirely rhetorical) then there might be a photograph of of Kay Whitmore, and then an excerpt of his official explanation of the penalty on the Kings' Dwight King after his hit on Alex Pietrangelo. From Jeremy Rutherford of the St. Louis Post-Dispatch:

Question: What did the officials see on Dwight King’s hit and what went into the decision to give King a 2-minute minor?

Whitmore: "Their judgement of the degree of violence (went into the decision) … they deemed it a minor penalty and that’s why they called it a minor. It’s their judgement. They see the whole play unfold and they didn’t deem in this instance obviously that King drove (Pietrangelo) into the boards. It was a hit, he was in a vulnerable position, but they didn’t deem it violent enough to call a major."

Question: As far as the aftermath, Pietrangelo being cut, did that warrant a 5-minute major?

Whitmore: "In these situations, if a player is cut to the face, and it’s visible right away, instantly, they’ll call a major … in most cases. In this case, they didn’t see the cut, the small cut, under his chin from what I’ve been told until up to a minute or so after when they were over by the bench. So it was a delay, a period of time that went by, and it’s tough for them to go over and say, ‘It’s a major now’ … because they didn’t see it after the scrum. He got off the ice. There was no visible blood. If it was running down his forehead or his cheek, it’s automatic. It’s a major game-misconduct. In this instance, they didn’t see it initially right away. They didn’t see the blood running down his chin, in his beard … one of those things."

As a refresher for you, here's the hit:

And here's a photograph, of a ref that didn't see Petro bloodied, looking at him after the hit (thanks to @heatonrob): 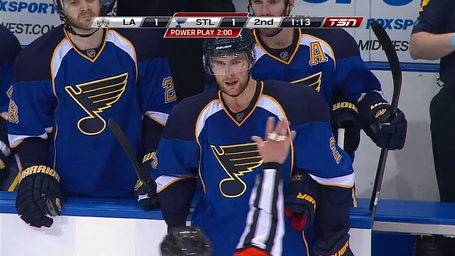 Who were the gems of refs who were working last night who "didn't see it?" Eric Furlatt and Stephen Walkom. Walkom was the ref who totally missed Raffi Torres' hit on Marian Hossa last round too. Also, both of these guys had to have it pointed out to them by a linesman that Colin Frasier was bleeding from his eye after a high stick from T.J. Oshie. Basically, they suck, and one would think that if the NHL were serious about penalties being called correctly in the playoffs, this joke would have been gone after the first round. After all, he missed a call on one of the longest suspensions in NHL history. That should account for something.

Back to Whitmore's explanation. Whitmore, who is the supervisor of officiating for this series, comes across like someone who didn't see the play either, and is trying to cover for the guys who "didn't see the play" on the ice. First off, how is that not driving someone into the boards when that's what the definition of boarding is?

Secondly, it was very obvious that Petro was cut before play re-started after the initial penalty was called. Refs look at players after a high stick to determine if they're bleeding or not and then adjust the penalty time accordingly all of the time. How is this a different circumstance? How could they not have adjusted it to a five minute major (and game misconduct)? Granted the Kings might've scored three shorties in five minutes, who knows, but the correct penalty would have been assessed.

Shanny'll probably look at it, and I'll update the post after he does. But as it stands, this is the weakest official explanation for a possible concussion causing call I've ever heard. It's not just "one of those things." It's something that needs to be taken care of on the ice to show that the NHL gives a flying flip about player safety.