An Open Letter To The St. Louis Blues

Share All sharing options for: An Open Letter To The St. Louis Blues 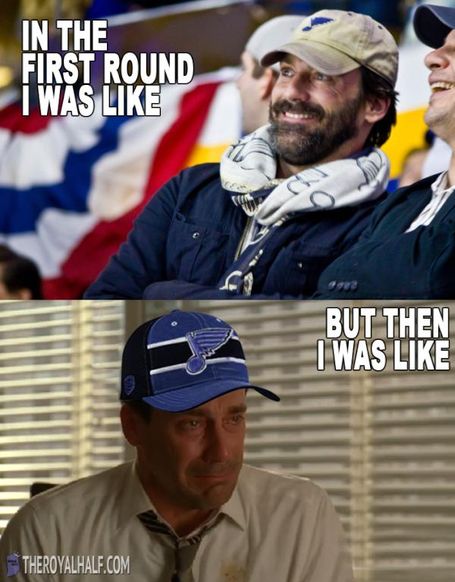 I hope you find yourself doing well in Los Angeles. With that being said, now is the time to put on your big boy pants. Which team are you bringing to the Staples Center tomorrow night? Will it be the team that sent a message to the San Jose Sharks that they wouldn't be bullied after game 2 of your first round series, or will it be the team we saw the last two weeks of the regular season that has once again reared its ugly head during the first two games of this second round series against the Kings?

Right now, you guys are going down faster than a Bob Richards piloted aircraft.

Brian Elliott is a better man than I could ever be. Because if I was between the pipes for that effort you put forth on Monday night, I would have probably hacked the hell out of each and every one of you with my stick during the first intermission.

This bullshit of playing hockey for 20 minutes? It's not going to cut it boys. The reason why you are getting your asses handed to you is because the Kings are doing what needs to be done to win games. The Kings are driving to the net and planting themselves there. That's how they are scoring their goals. They aren't taking low percentage shots that have a snowball's chance in hell of going in the net.

If you guys are going to get back in this series, you need to get in Jonathan Quick's head. Create traffic in front and make life miserable for him. Shooting from wide angles isn't going to work on a Vezina finalist. That's where you come in Captain Backes. Lead by example. Your team needs you now.

Barret Jackman, start being less aggressive with the puck. You are not Paul Coffey and no one is expecting you to be. I know you are a human pinata when it comes to criticism, but you had a good regular season. Go back to playing simple hockey. That's when you are at your best.

Kevin Shattenkirk, start being more aggressive with the puck. I don't know what has happened to you, but where's the guy who had 43 points and was a plus 20 during the regular season? The Petro injury doesn't fly because you were playing like Mike Lalor before he went down. The tentativeness needs to stop.

And as for you Carlo Colaiacovo, I don't know what to say. You can have a three assist game like you did in game 3 against the Sharks and look like an absolute world beater, and then cough up a shorty like you did on Monday night against the Kings. You have to step up your game and keep it there if your team is to have a chance.

And coach Ken Hitchcock, will you please dress Ryan Reaves? The Kings are bringing a physicality that you haven't seen yet in these playoffs. At least you know you are getting a 100 percent effort out of number 75 as opposed to the half assed effort we have seen from some of your guys thus far. Had he been playing on Monday night, I don't think Dwight King would have endured a one minute wrestling match like he did with B.J. Crombeen, and that's not a shot against Crombeen.

The time is now Blues. You guys are in a tight spot but it's not an undoable task. The Kings can be defeated but you are going to have to play a a full hockey game, not one third of a hockey game. But if you continue to play this crap brand of hockey as you have been, your 2011-2012 season will come to a close like a Naugles restaurant.