Share All sharing options for: Headlines from 2094: Hull propels Blues to Cup

Whenever I watch the Stanley Cup Finals, I think about how great it will be if the Blues win a Cup before I die. And then I get placed on a court ordered 96 hour psychiatric watch because I realize it will never happen.

When Brett Hull was God in St. Louis, McDonald's released a comic book series recounting his Stanley Cup victory with the St. Louis Blues. It will occur in 2094 as the Blues defeat a team of cyborgs coached by Barry Trotz.

Disappointingly, the comic book omitted the part where Hullie would leave St. Louis and win Cups with Dallas and Detroit first. Every good comic book hero has a flawed character trait/weakness, and the writers missed the boat on this one.

Thankfully, these prophetic comic books detail how the Blues will win the Cup. So, if you can live til 2094, you'll finally see the Cup parade down Market St. I hope my grandkids get to see it. I have provided a short synopsis of the comic book below. 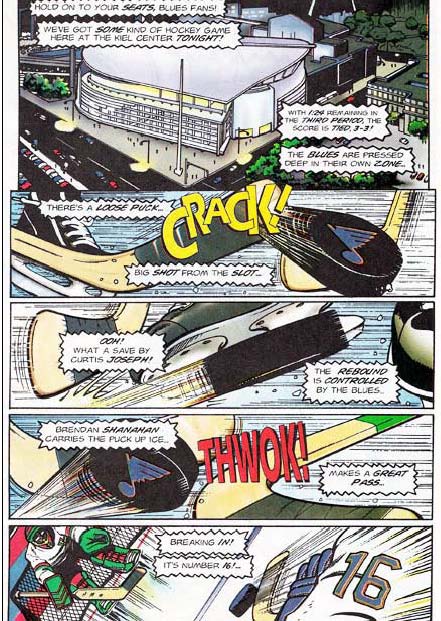 The Kiel Center is rocking. Brett Hull carries the puck down the wing and unleashes a backhanded lacrosse spear shot. This panel serves as a depressing reminder that we never won a Cup with Cujo, Shanahan and Hull. 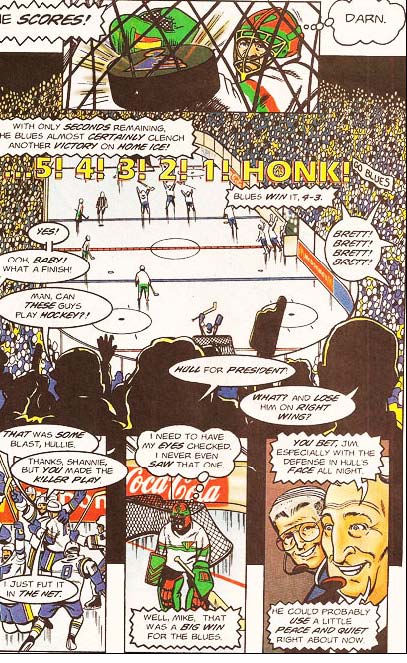 HE SCORES!!! Fans want Hull to run for President, but they don't want to lose him on right wing. Tim Thomas, however, is in full support of a right winger running for President. I'm not sure which team the Blues have just defeated, but I think they were a playable team on Blades of Steel. 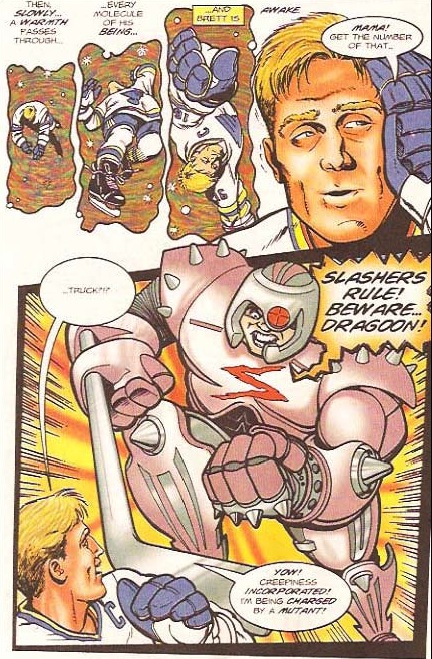 After the victory, Hull goes home to do a crossword puzzle. I guess they left out the "beer and chicken wings" portion of the night. Anyway, 16 down is "character" leading Brett to ponder many existential questions. Those frames were kind of boring, so I fast forwarded to the acid trip part where Hull gets knocked out during a game and warps to the future. 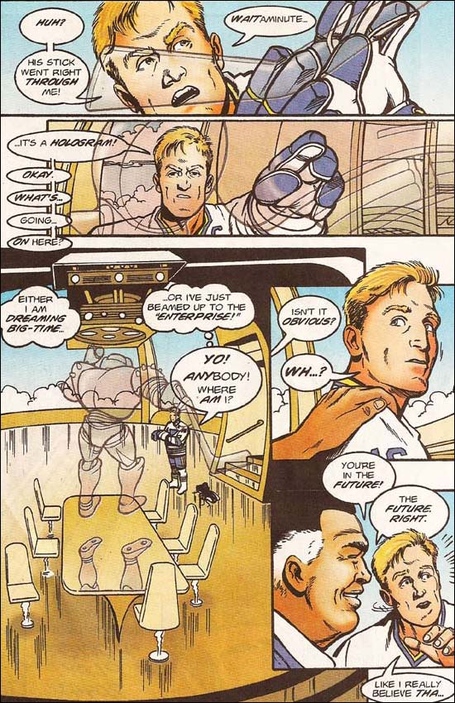 Brett has disappeared from a game and ended up in the year 2094! Holy shit, someone needs to see if this is what happened to Chris Stewart. Maybe the Avs win the Stanley Cup in 3014 or something.

The future Blues coach gives Hull the low down. With all the superhero movies, this comic is bound to be a summer blockbuster. When that happens, I hope Morgan Freeman plays the coach. 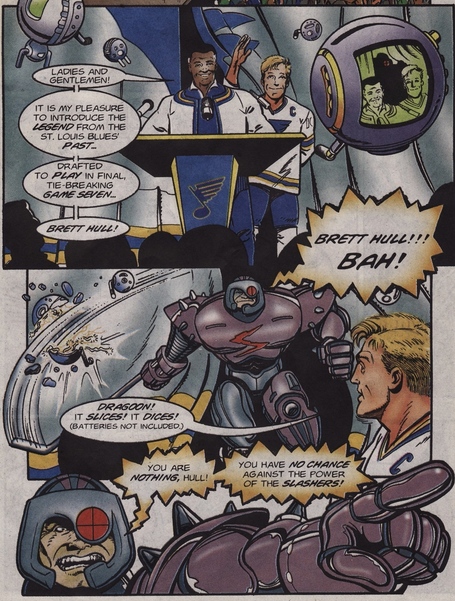 The new coach calls a press conference to introduce Hull to fans, but it goes sour faster than a Torts presser. "AhMiGAWD, King! What is the meaning of this?! That's Animal! One half of the former legendary tag team, Road Warriors!!!" 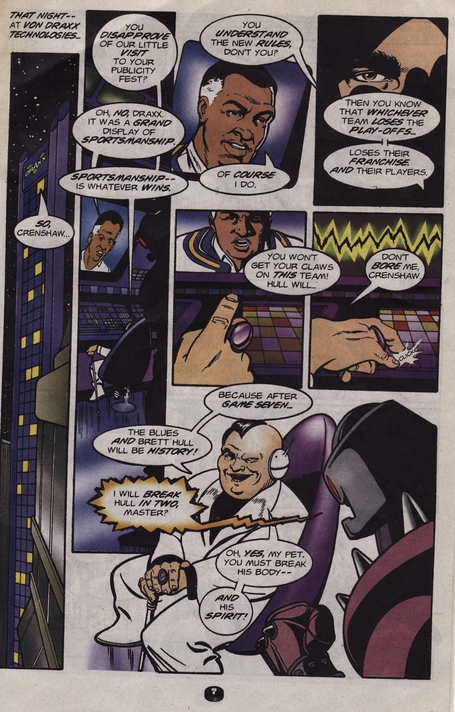 After the press conference, Morgan Freeman discusses the new rules of the Stanley Cup Final with the bad guy owner of the other team. Loser gets their franchise disbanded. I wish this rule would have been in effect in 2009.

At first, I thought the villain was Dr. Claw from Inspector Gadget, but apparently, the evil head coach/owner dude is Barry Trotz! Who knew the Chick-Fil-A diet would pay off after all these years? Trotz is outraged the Blues have picked up Hull. Technically, Brett is under contract with Blues in the year 1994. The cyborg tries to remind Trotz about Alex Radulov returning to the Preds under contract in 2012, but to no avail! He's pissed!

Apparently, Shanahan's job as disciplinarian has failed miserably, because Trotz is ordering his cyborgs to go after Hull. Trotz envisions a league with cyborgs who are always in peak condition and never get hurt, which I think means he wants his players to hire Gary Roberts as a fitness consultant. 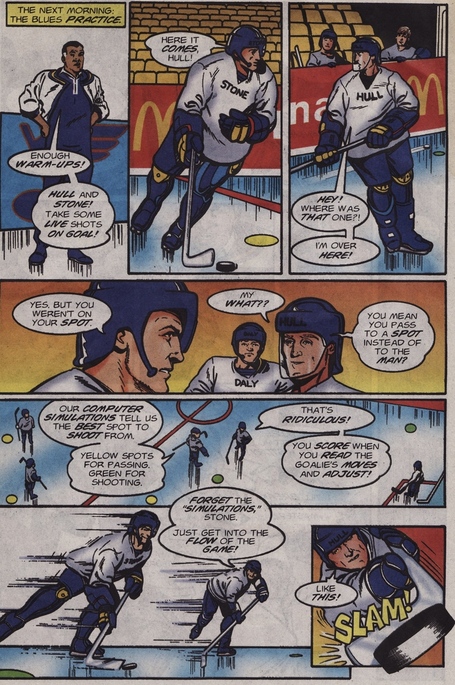 The game is 2094 is really different. Apparently the GMs have really fucked up the game during those Research and Development camps, and players now have to shoot from "spots." 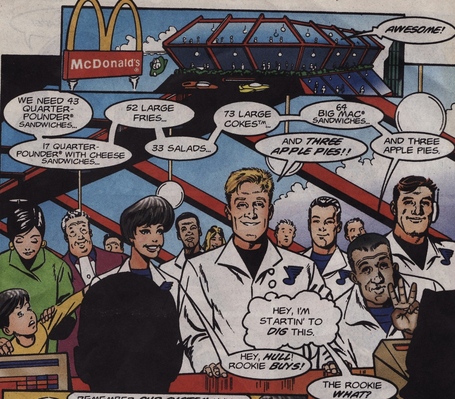 After practice, the whole team goes to McDonald's to eat. Holy shit, Keith Tkachuk was only about 100 years ahead of his time with his diet! That chick next to Hull is the Blues goalie. I think she's Julie "The Cat" Gaffney great grand daughter. 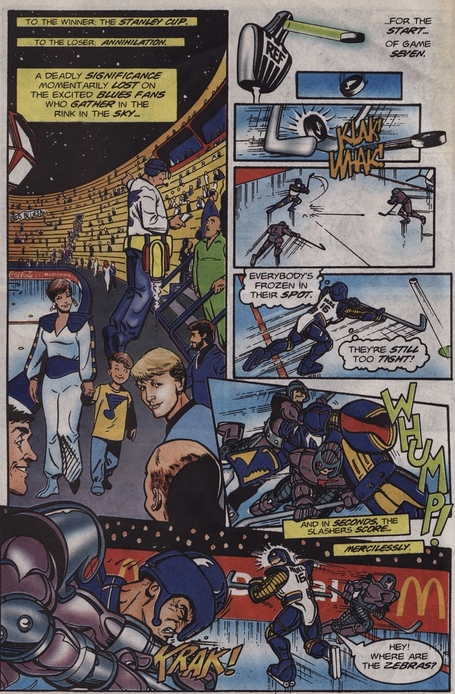 We go to Game 7 of the 2094 Stanley Cup Finals. The game is about to start and...HOLY FUCK A FLYING BEER VENDOR!!! The future is a wonderful place...except for the fact that women wearing shoulder pads is apparently back in style. 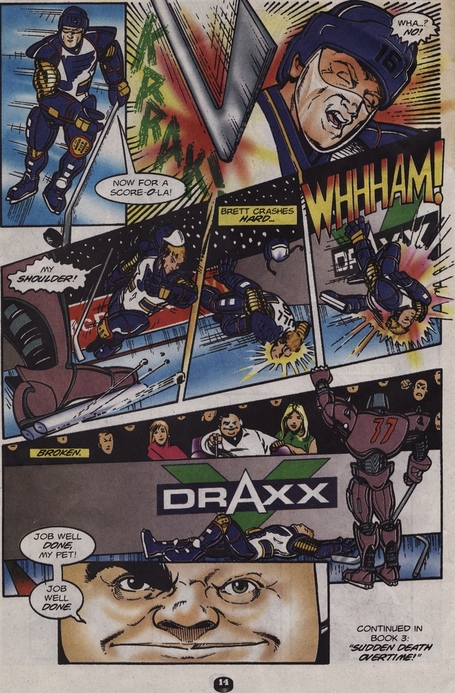 The Draxx team is really dirty. They goon it up the whole time and build up a lead. Cyborg Marty McSorley nails Hullie in the side of his head with his stick. (Side note: Someone should check to see if his curve is legal since this is the Finals.) Hull is down!! At this point, @socityhooligantheIII tweets: "Blues haven't changed since 1967. At the most critical time, something catastrophic will fuck up their chances. #SameOldBlues" 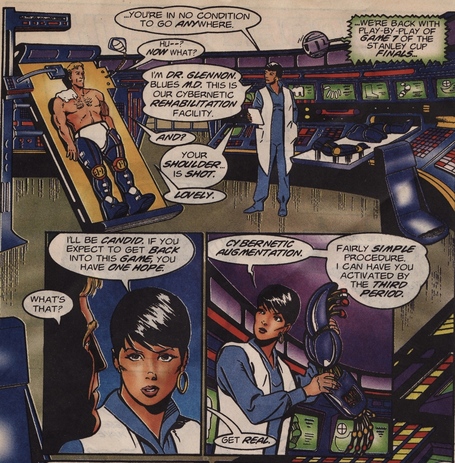 Hull wakes up to discover he's got a bum shoulder. The trainer lady wants to replace his arm with a prop from Lady Gaga's costume wardrobe. 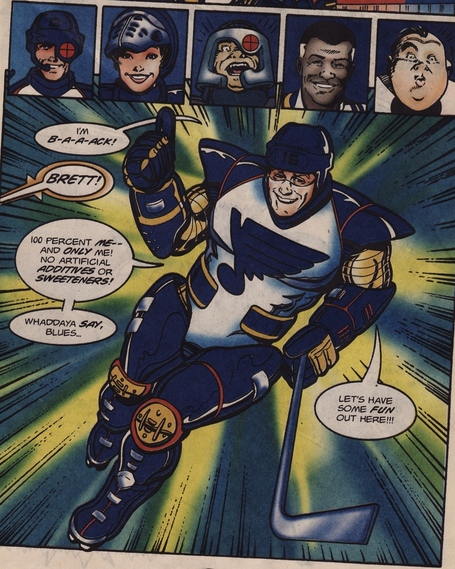 Unlike Doug Weight, Brett Hull decides to play with a bad shoulder because, you know, it's Game fucking 7 of the Stanley Cup mother fucking Finals. He comes back to the game just in time to tie it up for the Blues! 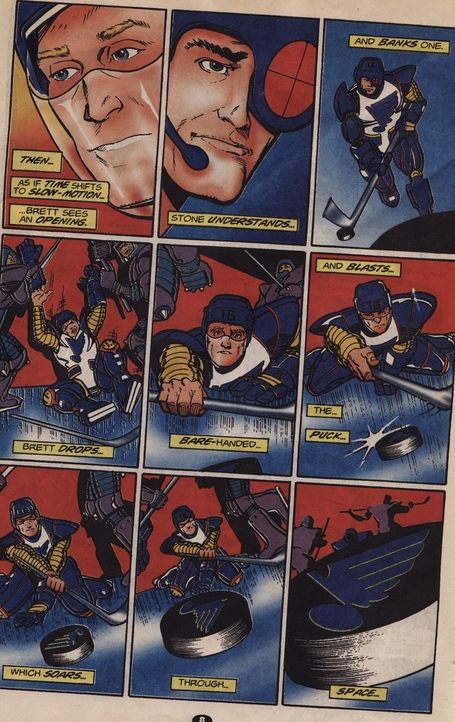 The cyborg team continues their goonery, but that doesn't stop Hullie. The game is in overtime, and Hull manages to get a shot off by dropping to his knees, hitting the puck, banking it off someone's head and...ok, spoiler alert, it goes in the goal. The next 9 pages are frames showing the puck bounce off everything in the fucking arena, and I didn't have the patience to scan all the pages in. So, yay. 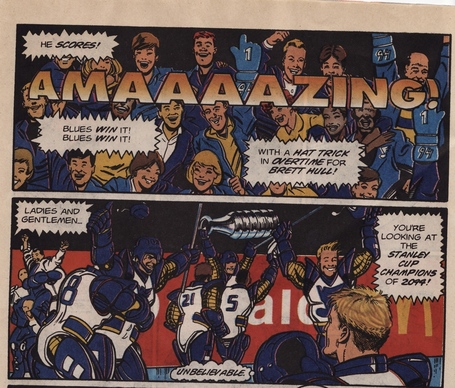 HE SCORES!! THE BLUES WIN THE STANLEY CUP IN OVERTIME!! In 2094, when Pang says, "Like you read about" it will literally refer to this comic book. Holy jumpin. Oh, and all you fans hoping Jackman doesn't resign with the Blues? From this picture, he apparently signs an 82 year contract this summer.

I'm hoping this comic book is right about the Blues winning the Stanley Cup in 2094. I probably won't be alive then since that's 82 years off. My only hope is that flying beer vendors are a regular thing at sporting events long before our first Cup in 2094.