Take A Seat Right Over There

Share All sharing options for: Take A Seat Right Over There 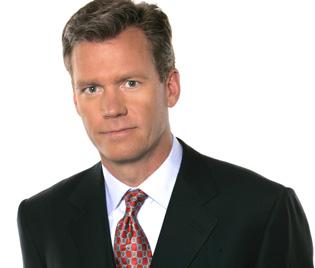 Two weeks ago, it was announced that heralded Blues prospect Vladimir Tarasenko was flying to St. Louis from Russia. As is par for the course with a minority of Blues fans, they went into Mach 5 creepy mode. On the local St. Louis Blues forum, one fan actually proposed going to the airport to greet Tarasenko when he landed while a few others said they would be at his first skate a few days later. I have no problem with watching the man skate, but apparently some took it a bit overboard. From the sources I have heard from at the St. Louis Mills Ice Zone, there were GROWN MEN...GROWN MEN....running into the rink to stake out their spot where the players come out so they could get an autograph from Tarasenko.

Either the Blues or the Ice Zone got so aggravated with the juvenile behavior that they roped off a certain part of the rink to keep the fans away from the players when I attended practice last Thursday. Since I like being a shit disturber, I tweeted the Ice Zone to see what the deal was and they said it was the Blues who made the decision. Some Blues fans tweeted in that they thought it was unfair while others tweeted that they got autographs when the players left the players lot outside of the Mills. Regardless of who made the final call, good for them. I have been to a few skates at the Mills and it's bizarre to watch the behavior of certain Blues fans at practices.

Look guys, I love our boys in blue as much as the next guy. One thing I won't do is stalk a 20 year old hockey player. I have attended a handful of practices and when I've gone, it looks like an open audition for Dateline NBC's To Catch A Predator. Stop acting like a bunch of 14 year old girls at a Justin Bieber concert. If you want to get an autograph, that's fine.....but we don't need to bring in the duffel bag with 84 items in it and listen to you talk about how you are going to get David Backes to sign his high school yearbook that you purchased on ebay. Also, stop waiting outside the players parking lot. These guys are people too. This is a job for them. When they are done with their job, they want to have a personal life. Do you like it when your boss or a client makes you stay later when you have stuff to do? Neither do they. Watch them. Enjoy them. Stop creeping on them.