Yet again, the Blues've shut out the Nashville Predators at Scottrade Center, winning on a strong performance by the defense and goaltender Jaroslav Halak.

As I mentioned in the game preview, if the Blues want to beat the Nashville Predators, all they have to do is score three goals. They managed that tonight, scoring a powerplay goal, a penalty shot, and a goal from rookie scoring sensation Vladimir Tarasenko.

Tonight's first goal was courtesy of T.J. Oshie. It's his third goal of the season, as the Blues' top power play line is really trying to open up space. When Oshie wants to get to the net, Oshie gets to the net.

He was in absolutely perfect position to tap in Patrik Berglund's shot. The goal was originally credited to Berglund, but was switched to Oshie shortly afterwards.

Berglund didn't have to wait too long for his turn to score. Taken down by Mike Fisher on his way to the net, Berglund got the NHL's second penalty shot attempt of the season. He, much like the other recipient Ilya Kovalchuk, capitalized on his chance. Berglund went high over Pekka Rinne's blocker and right to the back of the net:

Finally, in the third period, Vladimir Tarasenko figured one more goal wouldn't be a bad idea. Coming off of the bench, completely undefended, Tarasenko zipped to the net and put the puck between the legs of Pekka Rinne.

Tarasenko is starting to have some amazing chemistry with his linemates Alex Steen and Andy McDonald. The goal is Tarasenko's fourth of the year in four games, and his sixth point. He is, without a doubt, on fire. He's also tied for the league lead in goals -- good thing that NHL.com finally got a photo for him: 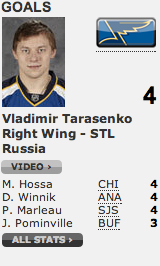 Tonight's shutout not only gives Jaroslav Halak the most in the league, it also puts him one away from Glen Hall's franchise record of 16. Let's see if the Blues can keep the roll going Saturday night against a very competitive Dallas Stars team, backstopped by Kari Lehtonen.

Predators At Blues Game Day #4: You Again So Soon?