The Blues've started a push to honor their past, and me being a history teacher, well, I like that idea. As a teaser for a post on the importance of history and identity, here's a little something on guys that we all love: the Plager Brothers.

Share All sharing options for: Long Live The Note: The Plager Brothers

This post was originally published on The Hockey Guys as a guest post on May 21st, 2010. Republished with permission.

"Before expansion none of them would have made it to the NHL. Bob was the only Plager fighter I considered to be a legitimate tough guy, but they got into their share of scraps and between the two of them, Barclay and Bob turned the Blues into the first fighting expansion club." – John Ferguson, Thunder and Lightning

Many a Blues fan from the early days of the team have fond memories of the Plager Brothers – Bob, Barclay, and later Bill – roughing up opponents on the ice, starting brawls with fans, dropping witticisms in the press, and giving the new expansion Blues a shot of character on their way to a NHL record setting three consecutive Cup Finals run by a team in their first three seasons. Glenn Hall and Jacques Plante might have been considered by hockey purists the reason for the Blues’ success, but while you might hear a mention or two of a great save by them, or them being nuts enough to play maskless once in a while, the big stories come via the Plagers.

Rough and tumble Barclay Plager came to the Blues via the 1967 NHL expansion draft. Bob Plager was supposed to be the muscle for the Rangers, but for whatever reason, that plan fell short – though he did fill the role of wise-cracking bruiser quite well. Barclay was playing under Eddie Shore in Springfield, where the concept of "old time hockey" was driving the team there nuts – so much so that they mutinied and got Shore to quit running the team. He was lucky enough to be shipped to St. Louis along with Red Berenson later that year, giving the Blues two of their most beloved players in one fell swoop. Billy Plager, the baby of the group in age and stature only, came along to the Blues organization later in 1968, but went back and forth between the big club and the minors.

While Billy was getting experience in the minors, Bob and Barclay were busy being the cause of sellouts – both at home and in other cities. "Barclay and I are hated everywhere," Bob says. "People buy tickets just to see if the Plagers will get theirs. Hey, we even sold out Pittsburgh. Barclay and I had a brawl with a dozen Pittsburgh guys and Barclay had his nose broken. Of course, it took three of them to break it. The next time we went into Pittsburgh they had a sellout, the first one ever."

The brawling brothers’ reputation followed them directly into Philadelphia. On January 6th, 1972, the Blues defeated the Philadelphia Flyers 3-2 at home in the Spectrum. This was in the pre-Broad Street Bullies days, but it was the game that inspired the Flyers’ GM at the time Keith Allen to beef his team and their style up. There were a few fights that game, but the real problems began at the end of the second period. A Flyers fan decided to dump a beer onto Blues coach Al Arbour, and the team took exception to that. Led by Bob Plager and Phil Roberto, a gaggle of Blues players that included Barclay went into the stands to find the offending fan. If this sounds familiar to anyone who isn’t a Blues fan, pop in a copy of Slap Shot for a refresher. This scene, along with the Plager Brothers in general, was the inspiration for the Hanson Bros. in the movie. Much like some of the Chiefs wound up having to be bailed out later that night, so did some of the Blues. 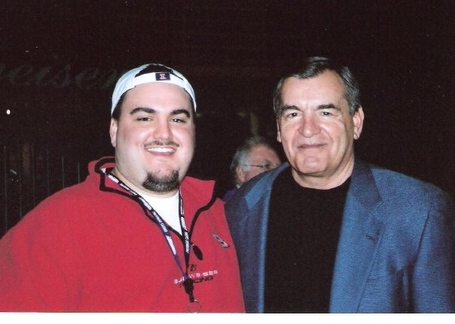 Barclay resigned as captain of the Blues in 1976, and went on to coach their farm team in Kansas City later that season. Bob Plager was given the coaching position of the team after Brian Sutter left in 1993, and has been a member of the Blues organization in some way since. Bill Plager was drafted by Atlanta at the during 1971-1972 season’s expansion draft. All three brothers left a mark. Bob’s number 5 was honored by the Blues and he is currently the VP of player development.

The Blues retired Barclay Plager’s number 8 in 1981, and after being named interim head coach in 1983, he maintained the position as head coach until 1988. In 1987, though, it was discovered that he was suffering from a brain tumor, and despite many rounds of treatment, succumbed to cancer on February 6th, 1988. The four-time All Star was both the most offensively gifted (44-187-231 in 614 games) of the brothers as well as possibly the most offensive in general – his 1115 penalty minutes in 614 career games comes out to at least a minor penalty a game.

The Plagers are still beloved by the city of St. Louis, a town known for holding on to its attachment to sports heroes, just as much as those heroes are known for returning to St. Louis.