The Blues honored Cardinals legend Stan Musial Friday, the day before his funeral, with a full-page ad in the St. Louis Post-Dispatch.

I've mentioned before before on my own personal blog about how fantastic it is that the sports teams in St. Louis seem to have a special sort of synergy and support for one another. When the Blues went to the playoffs, there was a "Let's Go Blues" banner on Busch Stadium. When the Cardinals won the World Series, they got a special night at a Blues game, complete with a Tony LaRussa puck drop. St. Louis is nothing if not a consummate sports town. We love our heroes and teams, and they're a cornerstone of our community.

Very few sports stars belong to St. Louis like Stan Musial did. I'm sure that you guys, like me, have been reading the remembrances in the Post-Dispatch, or have even been lucky enough to meet The Man. We were spoiled not only by having one of the greatest baseball legends ever call St. Louis home, but also one of the nicest athletes. He was a consummate gentleman, showman, ball player, and representative of the Greatest Generation. His passing, while not unexpected, has left a void that most people around here feel.

The Blues, who already honored Musial in their own way by blanking the Red Wings 6-0 on the day that Number Six passed away, are wearing jerseys tomorrow night before the game against the Minnesota Wild with Musial's name on them and his number six on the back. They will be autographed by the players and auctioned off to benefit both Cardinals Care and the Blues' own 14 Fund. Yesterday the Blues honored Musial on the day before his funeral with this full-page ad in the St. Louis Post-Dispatch: 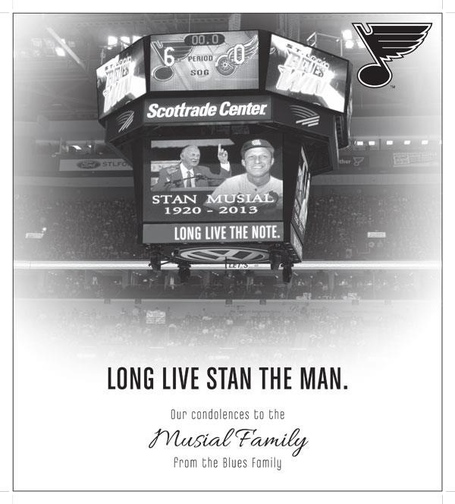 It might strike some as unimportant, or just a PR move by the Blues, or just something that they "had to do." But in St. Louis, which benefits from not having a huge population, or a huge transplant population, it's something that's done just because it's the right thing to do. The synergy between the teams here is a great thing to see when it's support for the playoffs or a championship, but when it comes to honoring one of the city's most beloved residents in history, it's more than a great thing to see. It's perfunctory, and it's class.