Blues To Wear Musial Jerseys During Warm Ups, Auction Them For Charity

Share All sharing options for: Blues To Wear Musial Jerseys During Warm Ups, Auction Them For Charity

If you're at the game tonight, keep your eyes peeled for the special auction set to benefit Cardinals Care and the Blues 14 Fund. The Blues will be wearing these to honor Stan Musial during pre-game warmups: 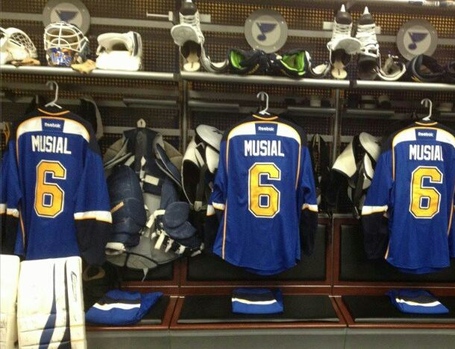 Afterwards, the will autograph the jerseys for auction. Musial was obviously a huge part of St. Louis' community, and not just baseball. Both Bernie Federko and Bob Plager were present at Musial's funeral yesterday, and the whole of the city has been acting like they've been in mourning for royalty -- which, with Musial, they might as well be. Baseball royalty, St. Louis royalty, Stan the Man was a royally good person who will be missed, and good one on the Blues to recognize that.

Not that we'd expect anything else from a team in a city whose sports franchises support each other as well as they do here in St Louis.