Just a disclaimer, I did receive the product for free, but not for free for a necessarily positive review. Any positivity contained within is because I like something, dammit. There's a lot to like, but a few bugs and gripes, too.

Share All sharing options for: NHL GameCenter Live: A Review

NHL GameCenter Live is discounted this year down to $49.99, which is appropriate seeing as how the NHL season was discounted down to just 48 games. The league and their partners in web-streaming have always tried to present a good product on the computer end of the deal, and this year it seems like they have again. Of course, video quality is dependent on your internet connection speed, though for me for some reason it seems hell-bound and determined to play at a lower quality than is possible. I'm assuming it's just playing it safe, since my internet provider is Clear and any high bandwidth use could cause my modem and router to burst into flames. 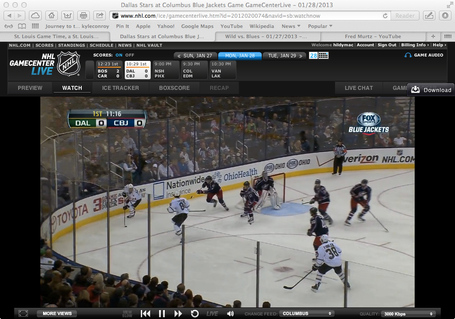 The PS3 app's development team have apparently been on vacation since September, because they just released the 2013 season patch for the app. They, unlike every other medium, did not have an app ready to go for the start of the season. In the past their app has been buggy (jumping back 20 minutes in the middle of the game or worse, restarting the whole thing; poor buffering; sound not matching up with the on-ice action; no sound at all), so maybe the extra time is for the better. All of that seems to have improved so far for this season; hopefully it stays that way.

Having GCL on my computer is still nice, since I can attach it to my TV with a HDMI cable. The picture is as sharp as it can be, and while not HDTV quality, is still nice for the price. The picture qualities on my Android G2 and my iPad 3 are both sharp, and having the option for audio via my computer, phone, or iPad when a game is blacked out is a good failsafe. The trick with the G2 -- and it might just be my phone, but it might be the app -- is to get GCL to stay operative. The app doesn't want to stay open. When it does, though, it's great. The iPad 3 app is generally some quality stuff. 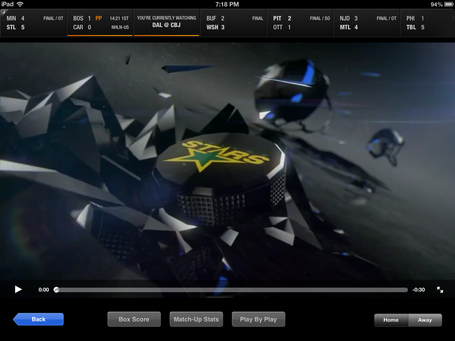 Don't forget about the blackout rules. Each region's rules are different (Atlanta's two hockey markets now, so games against the Preds, regardless of if they're on TV, were blacked out last year as were games involving the Carolina Hurricanes), so you might need to double check if you'll still be able to see the game if you're out of market. In market? No dice. Also a no go if the game is broadcast on the NHL Network, NBC Sports, or is the NBC Game of the Week.

In general, I think the app's a better deal than Center Ice. You can watch more places, and if you have a PS3, XBox, Roku, or Apple TV, you can watch on the big screen. At $50, you might as well, and if you live out of the Blues' market, you have to.