The Brilliance Of "Long Live The Note:" Why History Is Important For Teams To Remember

The Blues' new ad campaign for the year, "Long Live The Note," isn't just a neat tv commercial. It's a great lesson learned in social psychology by the Blues' advertising department.

Share All sharing options for: The Brilliance Of "Long Live The Note:" Why History Is Important For Teams To Remember

History is fast becoming a subject that's forgotten. Look at school or educational standards or government incentives -- none of them mention the social sciences. That's unfortunate, because it keeps people from knowing where they come from, and it keeps people from having a common canvas from which to draw inspiration. Knowing your history makes a civilization more united, more proud, and a force to recon with. There is no shame in national pride and there is no shame in common culture.

That's true in sports as well. What highlighting a city's history in a particular sport, or sports in general does is it gives people a source of common pride. Look at the Cardinals. Eleven World Series championships and the wall of retired numbers in Busch Stadium is something for the city to be proud of. The Cardinals' history is a part of St. Louis history. People are proud of not just the team, but of the city itself thanks to the standard of excellence of that team.

It's not just the Cardinals who have become part of the fabric of the city. While the older and successful team gets most of the historical focus, you can't ignore the hockey team that's been here since 1967. The St. Louis Blues organization hasn't, and it's lead to one of the team's smartest ad campaigns in recent memory.

The name of the franchise itself goes back to W.C. Handy's song "St.Louis Blues,' which is basically about a guy who runs out on his woman with some fancy lady from St. Louis. Not exactly an auspicious start, but the style of the song is very indicative of the style of music in St. Louis in the early 20th Century. St. Louis used to be one of the major musical centers of the new medium, just as important as Memphis or Chicago. This was probably one of the most booming times for the city in general, with many local monuments and buildings on the historic register, including the beautiful Cathedral Basilica of St. Louis, being built during this time. 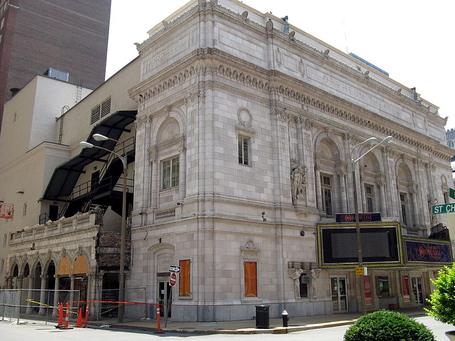 The Orpheum Theater, built 1917, via upload.wikimedia.org

When St. Louis was awarded an expansion team in 1967, it made sense for the owners, the Solomons, to pick out a time of civic pride for their inspiration. The Blues have been hearkening back to the city's history from the very first day by linking the style of music from the city's heyday to the new arrivals. If you want to instill a sense of pride in something new, tie it to the past somehow.

Between 1967 and now, the Blues have never won the Stanley Cup. They haven't made it out of the Western Conference finals since 1970. But just because they don't have the background of the Cardinals doesn't mean that they don't have something to draw on. If you look at the Blues' cast of characters through the years, and their individual successes, there's a lot to be impressed with. Look at Glenn Hall and Jacques Plant. Look at Mike Liut. No other team had a trio like the Plager Brothers. Gary Unger, Bernie Federko, Adam Oates, Brendan Shanahan, Curtis Joseph, Brett Hull, Wayne Gretzky, Al MacInnis, Chris Pronger. All of these guys were wildly successful during their time in St. Louis, and if there's something that St. Louisans appreciate, it's effort on an individual level that makes the team stronger. Of course these guys all either left or retired, but their successes in St. Louis has made all of them lifetime Blues. 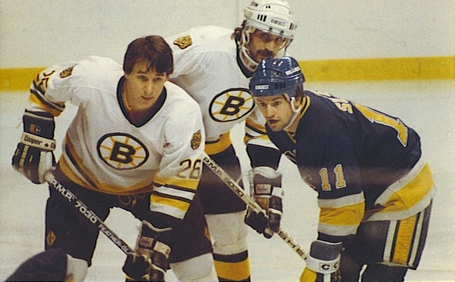 For proof you just need to look at the last Brett Hull Night, when scores of guys came back as Hull's dream team. They all wore the Blue note again, many for the first time in decades, but to most in the audience that night they never stopped being Blues. Their contributions to the city and to the team have made every single one of them lifetime Bluenotes just by virtue of effort. They cared, we care. St. Louis has this weird hold on their athletes. They get traded, and they come back on retirement. They retire from their teams and they stay put. They marry hometown women, they raise their children here, and they become part of the community. Very few other cities have this effect over their sports stars, and it comes from the appreciation we, as fans, have for their contributions to the team's history.

The Blues' current marketing team knows and understands that. All that you have to do is go to the Blues' website to see the rotating background, drawing deep connections between the past and the present. You can't miss the point of MacInnis and Alex Pietrangelo together on the same photo. We love our current Blues, and there's nothing that would lead anyone to assume that what has happened to previous generations of Blues isn't going to happen to them. The city loves them, so why not reinforce this affection by reminding fans of the faces of the past?

The team's introductory video for the season is powerful because of how much it focuses on previous decades. The team's TV ads are the same. The Blues even saved the old organ from The Arena and are re-installing it in Scottrade, though not as the daily use organ. Everything the team has done for the past decade or so has been about the future, but now that the future is here, they've switched focus in a very smart way.

The Blues have taken our common history and projected it onto the present and, hopefully, the future. By doing this, it's also shifting the pride from the past to the present, and the affection from the past to the present. Those of us who grew up with Hull and Oates are having kids who will grow up with Perron and Oshie. Instead of MacInnis and Pronger, the future generation will have Pietrangelo and Shattenkirk, and they will feel the exact same way about them as we do about the former. You don't need to have championships to be a proud fanbase; those'll come soon enough. What the Blues have -- and what many NHL cities have as well -- is a common history to be proud of, and one that's deeply intertwined with the recent history of our city.

That civic pride can drive people to support local institutions, and the Blues, much like the Cardinals always have been, are getting really good at appealing to that.