Game Time The Paper Is Back Tonight

You know we print a paper on paper for every Blues home game, right? All the cool kids are reading it.

Share All sharing options for: Game Time The Paper Is Back Tonight

Hi! Long time now see. I used to be a big deal around here. At least that what I always told myself. Remember that one time I wrote 24 season previews, one for each guy on the roster, and they ran once an hour for 24 hours? Yeah, I'm not doing that again this year. Thanks for asking.

So I'm in charge for the second year in a row the printed version of Game Time that we sell outside home games. It's completely different than what you read here. And we do that on purpose because this place is cool and free, but the paper is cool and costs a couple bucks. Because creating little pixels on your screen is totally free, apparently.

So here's what you need to know. 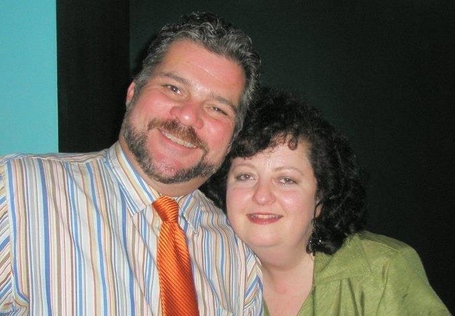 First and foremost, we'll be remembering our friend John Nicolay, affectionately known as King of All Vendors. He died suddenly in July at age 49. It will be the first season John hasn't been on a corner selling a hockey paper since early January 1995. Many members of his Game Time family are gathering at 6 p.m. tonight with members of his real family to share a drink, a laugh, a hug and a toast. Basically, a lot of us just miss our friend and we want to remember him in a way he would approve. Any and all members of the GT family are welcome. Bring a beverage; we'll probably have some to share too.

Second, I know you want to buy the paper. You should know we now have three locations: what will always be called John's Corner is the northeast corner of 14th and Clark. The guy who started Game Time will be manning that corner. Tell him hello and break a $5 bill. You can see Amy on 14th Street, just north of the entrance. If you're coming down 14th from Market, you'll see her huddled against the building for warmth just past the Peabody Opera House. And of course there's Clarence. He's feeling great and ready to go. And he's still as awesome and thankful to be healthy again as you can imagine. That's it. Three locations most games. If we add a fourth, either back in the garage (not likely) or by the statues, we'll let you know.

Say you don't have a ticket or you live in California or Canada or Sweden, you can subscribe to the paper and you'll get it via email. It's easy send me an email at gtbradlee at gmail dot com and I can give you all the details. Email subscribers get a pdf usually in the early morning hours the day of games. It's cheaper than buying it at the games and you get playoff games for free. I can't believe how great a deal it is either.

You know, it's weird having a team again this year that's close to the salary cap. There's those nasty expectations. This team in recent years hasn't always enjoyed expectations. Hopefully they've adjusted the roster enough and grown out of that stage. Or it's going to be a really bumpy season.

Thanks for supporting us through the years. I'm proud of what we're doing in the paper and the new voices who have emerged on the site. It's amazing to see how far we've come. And it wouldn't have happened without you great readers.

I can't wait for the season to start either. Let's Go Blues.