When Game Winning Goals Get Scored

Game Winning Goals tend to get scored late in the Second Period or early in the Third Period.

Share All sharing options for: When Game Winning Goals Get Scored

I am doing a project on the value of goals and this is a little offshoot. I am using the RTSS files to pull the scores and times. Just to be sure I am comparing apples to apples, these are games that ended in regulation. I went through every game from 2007-08 through 2012-13. In these charts and tables, time is in seconds. So the First Period ends at 1200, Second Period ends at 2400, and Regulation ends at 3600. The average game winner happened at 2226 seconds, or 17:06 of the second period. Let's break it down by total goals scored:

Graphically, it looks like: (my pictures aren't as pretty as Robb's) 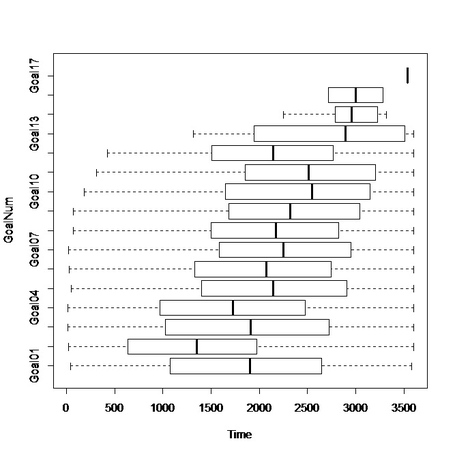