The Carolina Hurricanes are having a pretty meh year, which is more or less par for the course.

Hey, remember that time that the Carolina Hurricanes won a Stanley Cup, and former Blue Rod Brind'Amour was REALLY REALLY excited about it?

Damn, lookit him snatch that Cup from Bettman. It's a shame he wasn't able to beat the commish over the head with it "on accident."

Now? The Canes are one game above .500, third in the Metropolitan Division, and just riiiight inside of the playoffs - a bubble spot where they've been falling in and out of more often than not after winning the Cup in 2006. Maybe it's because they represent two states that no one ever thinks about, or maybe it's because no one can name one of their defensemen or working goaltenders (Cam Ward is broken - he doesn't count), but the Carolina Hurricanes get one big shrug when they show up in opposition arenas.

They shouldn't, though. There are two reasons for this: one, their mascot Stormy is a pig because they BBQ a lot in Carolina... 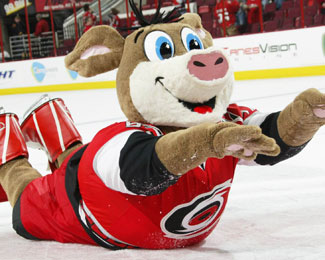 A pig doing the worm? Is it trichinosis?

And two, they have two Staals and a Semin.

Really, the fact that their mascot can be a tasty sacrifice to the hockey gods at any moment is enough right there to respect that fanbase.

This is your morning open thread. Swing by Canes Country and say hi to the biggest NASCAR/NHL overlapping fanbase in history, and then head back over here for a Lighting the Lamp, a preview, a little game day threaddin', and a recap.