There's some light at the end of this tunnel for the Blues, as their overall value increased since last year.

We all know that the Blues aren't the Maple Leafs. The Leafs are the most valuable team in the NHL at over a billion dollars. Yup. Billion with a B. Futility? Doesn't matter when you're a storied Original Six franchise playing in Canada's largest city. As a whole, franchises are up in value, with the average franchise worth $413 million, 46% higher than last year. Lockout? What lockout? Recession? Pffft. 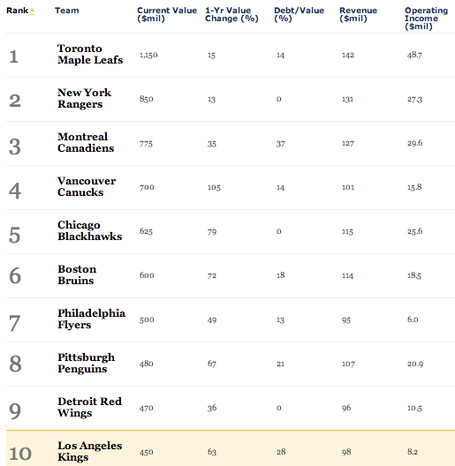 I bet you can figure out where the Blues ranked, right? No? Let me help:

The increase in value comes shortly after the sale of the Peoria Rivermen, which will saved the Blues some spending money. The Rivs and Carver Arena were losing money, and the Blues cut them loose to preserve their bottom line. It's helping in the short run. Don't believe me? Look at CapGeek. The Blues are 13th in league spending with $860,833 in remaining cap space. This tells you two things. One - selling the Rivs saved money. Two - the Blues aren't afraid to spend it, which means (probably, I hope) success in the future and continuing higher team valuations.

Does operating on a tight budget impact the Blues? Obviously - it always has. When was the last time that this team didn't operate on a tight budget? However you slice it, though, the team's valuation is not currently having an impact on the ice. Will it in the future? Perhaps if the Wolves don't develop the team's prospects well. For right now, the team is being managed well.

The debt to value percentage is 35%, down from 46% the year prior, which continues to be better than it was under the previous ownership group. The team's revenue last season was $72 million, down from $89 million the season prior. High expectations mixed with a crushing playoff defeat dropped revenue? Perhaps. Perhaps increased overall operating costs took a chunk out of that as well. Without a look at the books (and I don't think that's happening, so don't ask) we won't know what caused the drop. Obviously it didn't impact the team's value.

Are things perfect? No, but you have to admit that they're getting significantly better and nothing's impacted the on-ice product. If anything, the valuation of the team is primed to improve.

The only numbers Blues fans should be worried about this year are the ones that Robb does amazing things with every week. The team's value? As of right now, don't pay attention to it - just enjoy the show.