The Importance of Goals

Executive summary: The first goal is the most important.

Share All sharing options for: The Importance of Goals

So the notion that the winning team scores 66.7% of every goal goes out the window. Why?

Let's define the "value" of a goal as the amount it increases your chance of winning. Not all goals have equal value. There are 4 basic types of goals: goals that break ties, goals that extend leads, goals that create ties, and goals that cut deficits. Graphically, the value of a lead looks like: 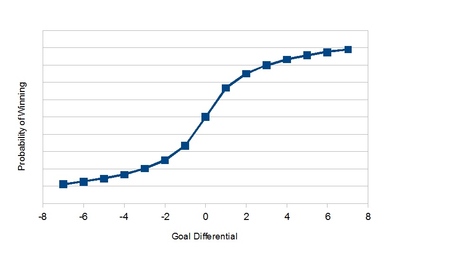 The most valuable goals break ties or create ties. The other goals are less valuable. Goals scored in blow-outs, whether scored by the leading team or the trailing team, are essentially valueless.

Powers of 2 and the Binomial Theorem

The right column is "Pascal's Triangle" which derives from the Binomial Theorem. The number of high value goals is the middle term(s).

All of this is retrospective. Looking closely at my data, I see that the team scoring the 17th goal won 100% of the 17 goal games (1 out of 1). Does that mean that the 17th goal is actually the most valuable? Uh, no. Prospectively, we have to not only look at the value of each goal, but the probability that each goal will happen. Let's call this importance. The first goal has the most importance.

Value of a Goal and Average Goal Total