Hot & Cold - Where the Blues are shooting and scoring from on the ice.

Sporting Charts recently released shot and goal heat maps for the NHL so let's take a look at where the Blues are shooting and scoring from this season.

Share All sharing options for: Hot & Cold - Where the Blues are shooting and scoring from on the ice.

Sporting Charts released a new feature on their site that gives you the ability to choose a team, player, season, and other parameters, to create a custom chart showing where players or teams are taking shots and scoring goals.  It also allows you to create a second chart so you can compare two different players, teams, or even the same player.

I started off just by taking a look at the St. Louis Blues this season. 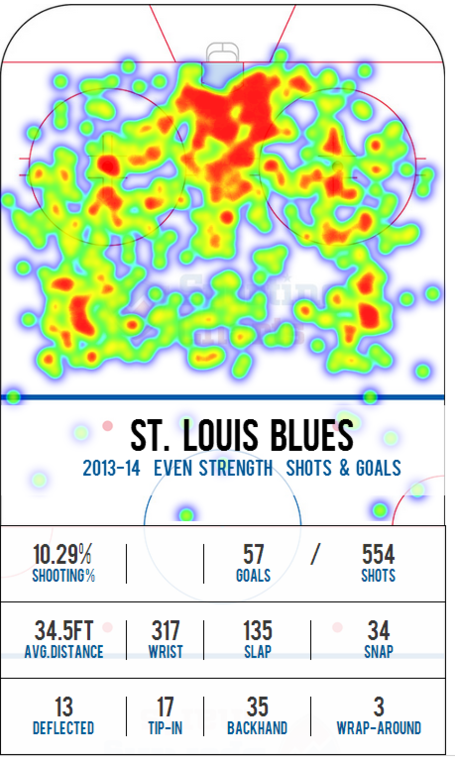 Okay.  This is kind of interesting and sort of useful.  This is showing both shots and goals made by the St. Louis Blues at even strength.  It is kind of what I would expect.  The only thing that even remotely stands out as interesting is that there seems to be more shots/goals being taken/made from the goalies left side which is the glove side for most goalies in the NHL.

Sporting Charts gives you the flexibility to look at shots/goals, or just shots or just goals.  So I compared the Blues shots/goal heatmap against just their goals heatmap. 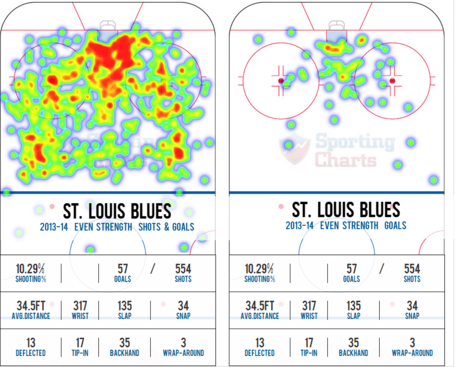 When you isolate just the goals and compared it against the shot/goal map you can start to see where the Blues are seeing their most success when shooting at even strength.  It appears that most goals are being scored from shooting on the left side of the goalie (where the shot ends up is not tracked here).  Even though the left point has about equal number of shots as the right point, the right point seems to have a few more goals than left.  That is the side that both Pietrangelo and Shattenkirk shoot from.

Of course we have to take a look at Alexander Steen and his success. 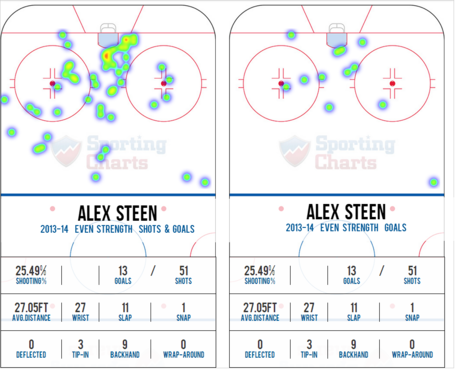 Take a look at the right line of the trapezoid and extend it out all the way to the blue line.  Most of Steen's shots are coming from the left side of that line.  Well, obviously!  He is a left winger.  But look at how many are taken just to the right of the goal down low.  However, when you look at his goals scored, they mostly occur from the slot and below the dots.  Crash the net and score goals?  Sounds like a good game plan to me.

Of course, I had to compare Steen to Alex Ovechkin.  Even if Steen doesn't think he is in a competition with the Great 8, well, he is. 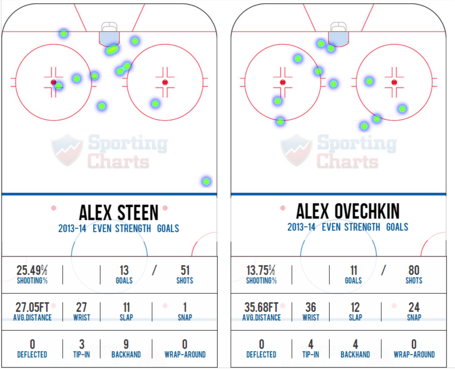 Yes, that 25% shooting percentage of Steen's is not sustainable.  Steen probably knows that as well which could be why he is trying to downplay any comparisons to Ovi.  Ovi's success is a combination of his tremendous skill and the volume of shots he is taking when he is on the ice.  Steen's success is a mixture of skill and luck.  But the fact that Steen is scoring goals most of his goals down low makes me believe that he isn't as lucky as some people make him out to be.  Sure we will see some regression of his shooting percentage, but to suggest that Steen's goal scoring so far this season is pure luck is not quite right in my opinion.

So go to Sporting Charts and check out the heatmaps.  I had to print-screen and then crop the images for this article.  Apparently they are going to be adding an export feature soon (this week or next week maybe).  But go take a look, post what you find down in the comments.  There is a lot to explore here.