The Blues and Avalanche are both on win streaks - whose gets to continue tonight? History's not on the side of the visitors.

Ah, the Central Division. Every in-division matchup promises to be a rough and tumble death match between rivals, though some of the new arrivals aren't exactly rivalry material. The Wild? Meh. Jets? Meh.

The Avalanche? Now you're talkin'. Here's the penalty list from the Blues' 7-3 win on November 14th: 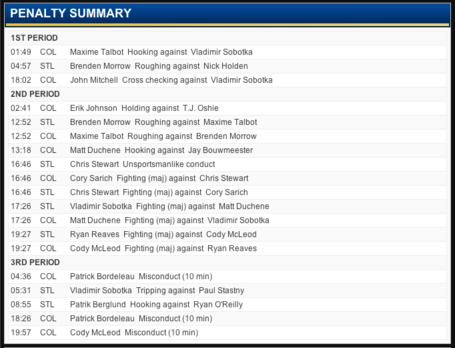 Just a meeting between friends, no?

Unfortunately Ryan Reaves is still out with a broken hand, so any fisticuffs that happen tonight will be handled by a non-bruiser. It'll probably be Chris Stewart, who does not seem to enjoy playing against his former team and also seems to enjoy taking himself off of the ice by fighting someone from the opposition that is inconsequential.

The Blues have yet to win with Ken Hitchcock as coach in Colorado. As Hitch told the Post-Dispatch's Dan O'Neill:

This is your game day thread. Stop prepping the stuffing and get ready for some hockey. Let's get two points. Let's make Patrick Roy mad. Let's see another Avalanche double goalie switch. Let's do this.

I asked Ken Hitchcock Monday what he planned for #stlblues 1st trip to Denver: "I'm putting up a fence between the benches." #avs #angryroy

Blues At Avalanche GameDay StoryStream: Pop The Top Off Of The Pepsi Center