GameCenter Live, especially for the iPad and iPhone, has undergone some tweaks this season that make it a solid choice for viewing away from home.

Share All sharing options for: NHL GameCenter Live (Mostly) Better Than Ever

(NOTE: this review of GameCenter Live is going to be based around the hardware that I have: the browser version, the iPad and the iPhone apps, and the PS3 version. if you use a different one, please let us know your experience in the comments)

It's been a month or so since the start of the hockey season, and that's given me enough time to poke around and play with GameCenter Live. I know many of you are out-of-market fans, so I feel your pain when it comes to watching the Blues. I also know that many of you are like me in the respect of your cable situation: you're cord-cutters. For whatever reason (cost, matter of principle, hatred of cable companies) you've decided that you can live with on-line feeds like Netflix, Hulu, and Aereo. If there's a way for you to either hook your TV up to your computer or stream things via something like a game system, Roku Box, or Apple TV, streaming sports are a good compliment.

I've used the on-line version of Center Ice, GameCenter Live, for about four years now, and every year I see improvements in most of the apps. This is my first year with the iPhone app, and it's much quicker than its Android cousin: 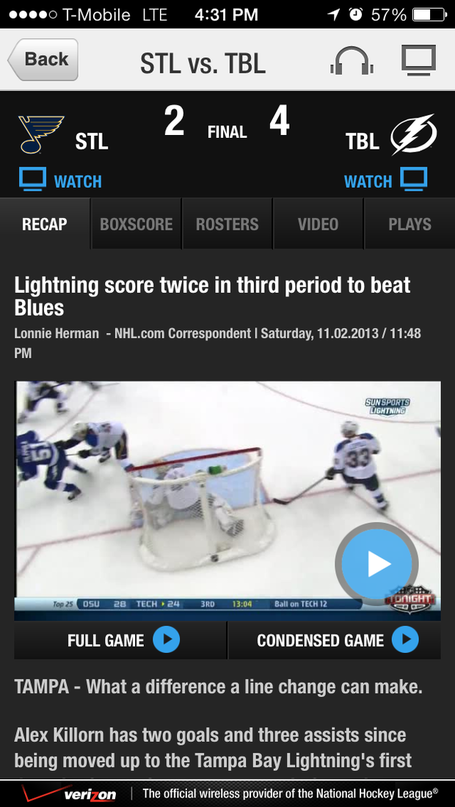 If you're following along live it updates quickly, and if you need to check it afterward for stats, there they are. The radio audio is clear, and for a tiny phone screen, the image quality isn't half bad: 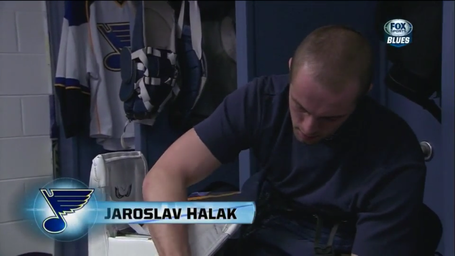 The iPad app is greatly improved. The picture quality is HD; I've seen more than one person on Twitter comment on the quality. It's purdy.

The PS3 app is where they've goofed. For the fourth year in a row, it's buggy as all get out. It skips, it buffers, it's two minutes behind the TV feed, it goes blurry to crystal clear to oops where the hell is the feed. If you can tolerate it, or if you get it on a good night, it's nice. As it stands now, half of the time I have better luck plugging my TV into the computer and streaming from my MacBook. If you ever wonder why I'm not on GDTs sometimes, there you go.

GCL on the PS3 and on-line does have the perk of The Vault, which is searchable by team and player. Re-live Brett Hull's glory years! Watch numerous other teams defeat us in the playoffs (or don't - I haven't). Marvel at Roman Turek! 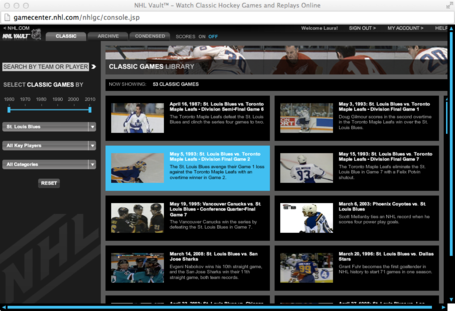 If you ever wanted to look at something ugly painted on center ice at the Kiel Auditorium, The Vault is for you. Heck, I recommend it even if you don't want to re-live the heyday of the clown jersey. GCL's a worthy addition if you're cutting the cord or and if you live out of market. If you're in market, it's a great way to keep up on the competition. I just wish that they'd get the same crew in charge of MLB.tv's At Bat PS3 app to design the GCL one. It would make viewing on the Playstation 3 so much more pleasant.