The Blues' top goal scorer is just behind Sidney Crosby and Steven Stamkos for the NHL lead in points. Will he pot his 15th goal in his 15th game tonight?

Who would have thought that the Blues' top scorer, Alexander Steen, would be third in the NHL's scoring race entering into tonight's game? And yet there he is, third, after Pittsburgh's own Sidney Crosby and the Tampa Bay Lightning's Steven Stamkos: 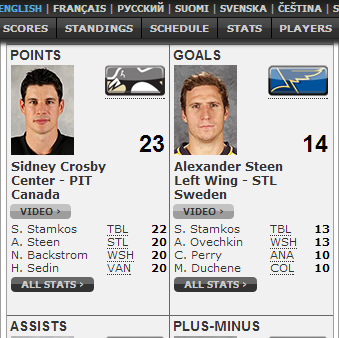 There's Steener, leading the league in goals. He looks confused by it, almost like a dog staring at a ceiling fan. He's probably not the only one.

The Blues haven't hosted the Penguins at Scottrade since January 24th, 2012; with the scoring race actually involving a member of the Blues and a marquee matchup on a Saturday night, the place should be jumpin'. It better be. There's no reason to be at home when you have a team that's as much fun to watch as the Penguins in town. It's even more fun to try to figure out what Marc-Andre Fleury the Blues'll be facing off against tonight. Will it be the MAF who is leading the league with ten wins? Will it be the "lapse in attention" version who allows soft goals? Will it be somewhere in between? Whoever it is, the Blues need to up the intensity. These aren't the Calgary Flames. Taking their foot off of the gas will have very, very negative consequences. Slack at your own risk.

Say hi to the guys over at PensBurgh, laugh at whatever preview the guys at The PensBlog have cooked up, and come back later to check out a Lighting the Lamp, a preview, a GDT, and another recap by resident recapper, RealBadRobot.