Canadiens At Blues Game Preview: No Backes, But Jaden Schwartz Is Back

The Blues won't be going with the same... shall we say "interesting" line up as they iced against the San Jose Sharks.

Share All sharing options for: Canadiens At Blues Game Preview: No Backes, But Jaden Schwartz Is Back

Who here wants to see more of Carlo Colaiacovo as a fourth line left winger?

No, really. There has to be a hand somewhere. No? Ok, then. You all should be happy, then, because you're not going to see him there again tonight. Jeremy Rutherford has all sorts of goodies about tonight's line-up over on his Morning Skate, and they include this gem (and I mean that non-sarcastically):

"I thought I did pretty good," Colaiacovo said. "The thing that was pretty tough was just trying to get used to the different skating routes and different positionings. But my linemates communicated with me real well and I felt really comfortable out there, especially not having any practice at it.

"If that's something I can practice a little more, I'm comfortable there. But obviously I'm a defenseman first. Whatever provides me with an opportunity to be in the lineup. If that's what it takes, I'll be willing to work my hardest to be good at it."

It's good to see a player realize that while he's out of his comfort zone, he's still being leaned on to fulfill a role and he wants to do it to the best of his abilities. The Blues might need that go get 'em attitude tonight. Backes is, for sure, a no go tonight as the team is still evaluating him for concussion symptoms. Jaden Schwartz is back in tonight, but Vladimir Sobotka might be closer to a game time decision.

Still, the loss to the Sharks wasn't a horrible blow-out, even with a weird line-up, so take that as a sign that a win tonight against the Montreal Canadiens is possible. Speaking of the Habs, holy hyperbole, Batman. This is their website's splash page: 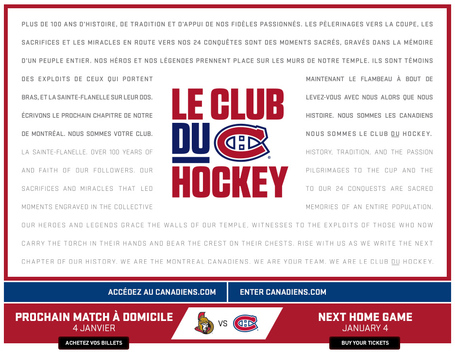 Hey Cardinals, I think you just got schooled on over-inspiring people with your history.

The trick for the Canadiens, though is how to inspire their own team. After missing the playoffs last season, they're second in the Atlantic Division and third in the Eastern Conference with a 21-12-3 record. They've had issues scoring in December, with just one game - a 3-1 win over the Phoenix Coyotes - in which they've won by more than a goal. And, of course, there was the mortifying 6-0 loss against the Los Angeles Kings at home which was a splash of cold water. How will they fare against the Blues? Considering that St. Louis isn't playing with a full line-up, it's hard to make that call. Jaroslav Halak has beaten his old team every time they've faced each other, and he's in net tonight. Perhaps he'll get a break during the first period tonight and the boards won't give up as many bounces. Maybe the team can limit shot chances on him. Or, heck, maybe he can speed up his reaction time a tad, since Tuesday night at times it looked like he was playing in sludge.

Whatever the outcome, games against the Habs are always fun. They're not tiny anymore, unfortunately, but they're still a quality team to play against that the Blues don't see too often. This is the first time in nearly three years that they've come to Scottrade.

Canadiens At Blues GameDay StoryStream: To Hab Or Hab Not