As regular readers of this space know, one of your "Game Time" Prospect Department's favorite pastimes is participating in mock drafts. It's a great deal of fun to match wits with like-minded prospect enthusiasts from other fanbases, and to compare your results with what actually happens in the real NHL Entry Draft. 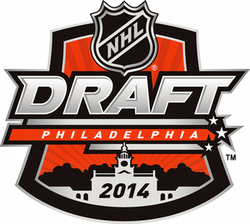 Usually, these mocks start going strong at about the same time the spring thaw hits; this year, however, a poster at the "Hockey's Future" website decided to hold an early three-round mock just to see who's looking at who now, and will re-visit the mock later in the year to see how perspectives have changed over the course of the season.

As is always the case in these things, your GTPD jumped in early to represent the Blues, and following are the results of the four selections we made for the Blues in this first mock draft of the 2013-14 season.

A few administrative notes: The Blues had the 28th pick in this mock, with positions based on the league standings as of Nov. 30. Trades were not allowed in this mock, which your GTPD likes because it keeps the mocks more grounded in reality. While trades do happen at the real draft, the fan trades that occur in mock drafts are generally very divergent from the real deals at the NHL draft tables.

If trades had been allowed, we would have made an effort to move up about ten spots by offering the Blues’ first, the second-round pick acquired from Edmonton in the Perron trade, and Chris Stewart (whom we propose to replace on the Blues’ 2014-15 roster with Dmitrij Jaskin).

Also, while the concept of "best player available" remained at the forefront, we made a conscious decision to focus at least our first two picks on the best skilled forward available. The Blues' system is lacking in skill and firepower among forwards below the NHL level, with only Jaskin, Ty Rattie, and 2013 pick William Carrier providing real "Top-Six" offensive potential at this point.

As indicated previously in this space, there were four players that we were initially targeting for the Blues' first-round pick, and those players were targeted based on our analysis of past drafts under the Armstrong regime, whereby the Blues are expected to concentrate on college-bound USHL players and/or Europeans in the first round. The four players on our initial target list (with their stat lines as of Dec. 18) were, in alphabetical order:

In order of preference, the players were ranked as follows: Larkin, Kempe, Schmaltz, Lindblom. In the mock, three of these players were picked before we had a chance to select them for the Blues, two outside of the range in which we would have attempted to land via trade. Schmaltz was the first player to come off the board, going to Winnipeg at 13th overall, and Kempe followed him immediately thereafter, becoming a Washington Capital with the 14th-overall pick.

Larkin, our primary target, was still in play as the Blues' selection began to draw nearer, but he too fell off the board before the Blues could get him, going to Minnesota at 21st overall. That left Lindblom still in our sights, but some other attractive forward prospects remained in play, and they moved ahead of Lindblom on our list.

Ehlers and Kapanen fell out in the two selections immediately preceding ours, Ehlers to Colorado at 26th and Kapanen to Anaheim at 27th overall. That left us with a pretty easy decision, and we selected Milano at 28th overall for the Blues. Milano fits the profile of a "typical" Blues' first-round pick under the Armstrong regime in that he plays in the USHL with Team USA, and he is committed to national power Boston College for the 2014-15 season. The Massapequa, NY native is lightning-quick, and is able to "think" the game at high speed as well. He is currently the leading scorer for the USNTDP U-18 squad, in overall games as well as in USHL-only play (12 GP, 7-17-24, plus-14, 19 PM, 2 PP, 0 GW).

Milano has played both center and left wing in the past, but his size suits him better to the wing in the Blues’ system. Only Carrier and 2012 draftee Mackenzie Maceachern would be ahead of him on the prospect depth chart on the port side at this point, and we feel that Milano's skill level will be a welcome addition to the Blues’ system going forward.

Thanks to the Edmonton Oilers, the Blues held the second pick in Round Two at 32nd overall. In addition to Lindblom and Pastrnak, two other players held our interest at this point, both with a St. Louis connection:

Macinnis is, of course, the son of Al Macinnis and was also born and raised in St. Louis. Originally committed to the USNTDP U-18 squad for this season after playing in 2012-13 for the U-17 team (52 GP, 15-10-25, 6 PM), Macinnis decided instead to jump to the Ontario League and skate for the junior club where his father first made his name.

Clarke in particular was appealing, in that he was born and raised in Wildwood, MO and was very highly regarded for this season after a solid rookie OHL year in 2012-13 where he scored 19 goals and 51 points in 62 games. He has battled injuries this season, however, and is struggling offensively to this point, so we decided to gamble on his availability later in the round and selected Pastrnak at 32nd overall.

The thinking here was that the Blues would have had several opportunities to view Pastrnak in person this year, as he is a teammate in Södertälje of 2012 draftee Niklas Lundström, and he is regarded as a very skilled offensive player. "The Scouting Report" website notes that Pastrnak "is an intriguing offensive talent who has excellent one-on-one ability and finishing skills," but further notes that his defensive game is "a work in progress." Still just 17 years old (May 1996 birthdate), the Czech-born Pastrnak has been holding his own against grown men this season in the Allsvenskan, and a positive plus-minus mark indicates that the concerns about his three-zone play are being addressed.

Lindblom eventually went 39th overall in this mock to Carolina, and our gamble on Clarke failed to pay off when the Rangers selected him 41st overall. Macinnis went to Vancouver at 46th overall.

For the Blues' second selection in the second round, we were leaning towards choosing a goaltender, preferably one either in college already or headed there next season, so as to give the Blues a longer time frame in which to shake out the current prospect goaltending situation.

There are four prospect goalies in the system now, and our best guess is that in 2014-15 Jake Allen will be in the NHL, with Jordan Binnington and Lundström (who is already signed to an ELC) splitting duties with the Chicago Wolves and current junior prospect Francois Tremblay getting his feet wet in the pros with Kalamazoo of the ECHL.

Our primary target for this pick was Boston College goalie Thatcher Demko (6’ 3, 192, 6 GP, 4-1-1 record, 2.31, 91.1%), currently considered one of the top two goalies available for the 2014 Draft. Adding Demko to the prospect stable would give the Blues up to three years to figure out how the current prospect goalies fit in long-term, but Buffalo threw a monkey wrench into that plan by taking Demko 51st overall, so we shifted gears and selected Russian import Nikita Serebryakov from the Saginaw Spirit of the OHL. The Moscow-born Serebryakov has good size at 6’ 1, 170, and is in his second OHL season this year with a 5-4-3 record, 2.94 GAA and 91.4 save percentage in 14 games.