The Blues travel to Dallas for the first time this year.

This is the first visit of the year to Dallas, the second of 5 games that we will play against them as part of the "new" Central Division. The previous meeting was in St Louis, where the Blues shellacked the Stars 6-1. It'd be foolhardy to assume this game would go the same way. It will be a struggle to put the emotional win against the Blackhawks behind them, and focus on the game ahead. The fast turnaround will be hard on them physically, but may actually be helpful mentally. Sure, there's going to be some tired legs, BUT, the less time to think about the win the night before, the better. Just play your tush off, and you can celebrate two wins instead.

The Dallas Stars are a rebuilding team, but are definitely on the rise. Their record so far this season is 19-12-6 and they are in the heart of the wildcard race. They are 6-3-1 in their last ten games, including 4 wins in their last 5. They beat the Predators 4-1 on Friday, and this game tonight will be the second of a 5-game homestand. Safe to say, there's a lot of momentum on their side. A good run at home will set them up nicely for the remainder of the season ahead.

In the realm of #FancyStats, one popular measurement is called PDO - the addition of the team's shot percentage with the team's save percentage. For the season, the Stars have shot at 9.1% and stopped pucks at a 91.4% rate (a PDO of 100.5). The site ExtraSkater shows the following PDO info for Dallas: 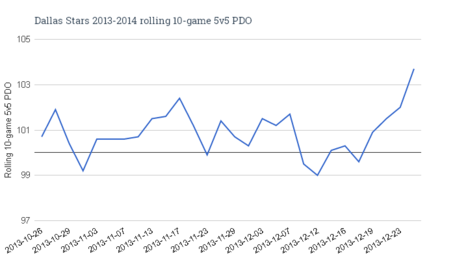 That's what that momentum looks like - a sharp spike in PDO. The Stars' last ten games include 5-on-5 shot percentages of 13.8 , 17.6, 17.4 (twice) and 18.2, and save percentages of 100 (three times), 96.2 and 95.0. In the long term, a team's PDO will typically even out to 100. However, in the here-and-now, we're facing a team with a lot of confidence, and that tends to breed success. That's what the Blues will have to attack tonight. That's easier said than done, especially with a certain sharp dressed man sitting in the pressbox.

The players to watch for are the ones that you might suspect. The leading goal-scorer and overall points leader for the Stars is Tyler Seguin (19G, 18A), followed by captain Jamie Benn (12G, 21A). After that, there's a steep drop: Calder contender Valeri Nichushkin (7G, 12A) and Alex Chiasson (8G, 11A) each have 19 points. Shut down Seguin and Benn, and you're on your way. No surprise, then, that these are the mostly the same guys who lead the team in possession. All but Chiasson are 52% or more in 5-on-5 Corsi. Those are the tres hombres to look out for. Perhaps the most amazing stat for the Stars involves their special teams. While the Dallas PK is in the middle of the pack at a respectable 82.5%, their power play is atrocious at 11.4% - 2nd worst in the league. Even worse, if you look at just home games, the Stars have scored only 2 power play goals in 58 home power-play opportunities, a conversion rate of just 3.4%.

The Dallas net is guarded by Kari Lehtonen (the Defending Big D guys have coined the phrase "Keep Calm and Kari On"). This year he has posted a 15-8-6 record and 2.46 GAA / .922 Sv% stat line. His backup is Dan Ellis (4-3-0), who has 3.04 GAA and .904 save percentage. The Stars will be missing Trevor Daley, Sergei Gonchar, and Stephane Robidas due to injury.

Final Verse: Nice that the divisional games are back in the Central time zone... the opening faceoff is at 5:00 PM St Louis time. Wait- travel between back-to-back games, combined with an early start on the second game? Not so nice. Well, at least it's a break for our European friends. The TV broadcast will be on Fox Sports MW, and the radio call will be on KMOX 1120 AM. The GDT should drop shortly before the puck does. Until that time, this is your pregame warmup. Rekindle the old Blues-Stars rivalry, pass judgement on their new uniforms, and definitely don't be afraid to mess with Texas:

Blues At Stars GameDay Storystream: Didn't We Just Do This?