Blues At Wild Morning Open Thread - End 2013 With A Win

Will David Backes be in tonight? Will the Blues keep their win streak over the Wild(s) rolling? Will anyone freeze to death in whatever frozen wasteland Minnesota has become? Stay tuned.

Share All sharing options for: Blues At Wild Morning Open Thread - End 2013 With A Win

Newsflash: St. Paul is cold. Like, really cold. As in, how do people live there during the winter cold: 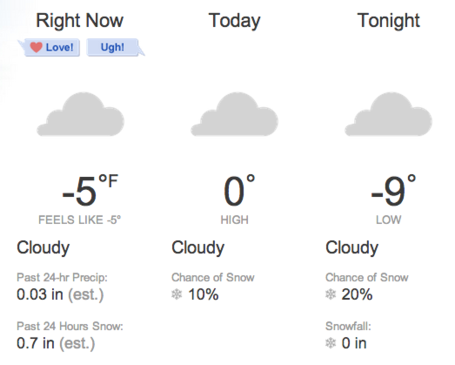 Good lord. I totally understand why they're the State of Hockey - they're frozen over half of the year. Not surprisingly, all sorts of hockey players hail from the land of 10,000 Frozen Over Lakes, and David Backes is one of them.

Backes may or may not make a homecoming on the ice tonight. He travelled with the team, which is a good sign, and he's skated, but he's more or less a game time decision. If Backes makes it back tonight, that means that the Blues will only (!) have Alexander Steen, Roman Polak, and Jordan Leopold on IR. Progress! Slow, slow progress.

Brian Elliott's in net tonight. Jaroslav Halak is coming down with a case of the flu, which has apparently been sweeping through NHL teams because flu shots aren't included in their insurance plans and no team has a Wallgreens nearby at which to get them.

This is your morning open thread - go on and treat it as a Canada vs. USA World Juniors gameday thread if you'd like. While you're waiting on CCR's preview and the game to start (AT FIVE), head on over to the nice Minnesota folks' website Hockey Wilderness and say hi.

Blues At Wild GameDay Storystream - End 2013 With A Win