Apparently there is just something about a west coast team that brings out the worst in the Blues.

Share All sharing options for: Passes...how do they work? Blues lose 5-2 to Ducks.

Blues had yet another slow start tonight which led to Anaheim scoring three goals in the first, and the only goal in the 2nd.  Blues bounced back at the beginning of the third, only to lack the drive and intensity needed during the last powerplay of the game to get them the go ahead goals they needed.  End result?  Anaheim Ducks 5 - St. Louis Blues 2.  I didn't know I was doing the recap until sometime during the second period, so please excuse the brevity.

Let's get this recap going with some background music as suggested by Grant Sales. 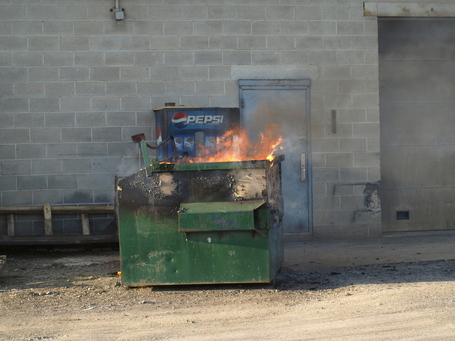 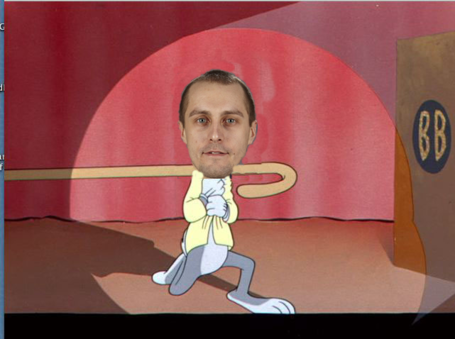 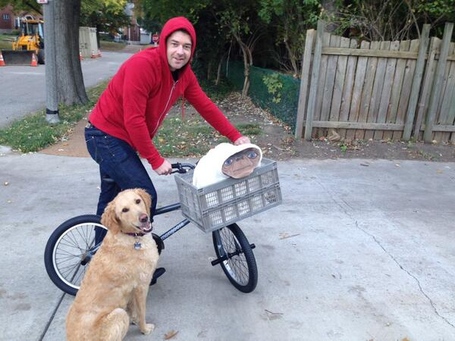 Elliott eventually stopped 13 out of 14 shots.  This is the second time Halak was pulled this season.  But the real story of the first was just lazy, slow play by the St. Louis Blues.  Blues were giving away the puck like Christmas shoppers dropping pennies in red kettles during the holiday season.  They were making cross ice passes they had no business making and making passes through traffic that they should've known better to make.

It was really just more of the same.  Lazy play.  Bad passes.  Lack of effort.  The highlight of the second period was David Backes' kick-off to his Beat Up Canada Tour 2013 as part of his warm up for olympic hockey in a couple of months.  Backes politely invited Corey Perry to a round of fisticuffs who replied to Backes with a facewash and then promptly hid behind the refs like some sort of gradeschool punk.  Also, this is the only Ducks' goal I'm sharing with you tonight because Patrick Maroon had an assist.  He's a good St. Louis boy and everythink like that.  Let's go!  *thumbs up*

Blues are now down 4-0 heading into the 3rd period.

This is where it finally gets interesting.  First off, Hitchcock starts the period with Steen, Sobotka, and Tarasenko on a line.  But it is the Schwartz, Backes, Oshie (was this a weird line change thing, or was Hitch trying to make things happen?) line that gets the first goal for the Blues tonight.  I can't gush enough about how Oshie protects the puck.  He swings behind the net delivers the puck safely to Schwartz.  Schwartz says, "Thank you very much Mr. Oshie," and slides the biscuit ever so deftly into Anaheim's basket.

At least now the Blues will not be shut out.  They begin to show a little more fight.  There is a great effort by Shattenkirk and Polak.  Shattenkirk just puts a nice wrist shot on net, and Anderson gives up a huge rebound.  Polak does his best imitation of the MacInnis statue out front, and blasts a shot on goal.  Polak's shot doesn't go in, but that slapshot ought to make Al MacInnis rather proud.

Three minutes later, Berglund splits the Duck's defense, steals the puck from Maxim (yes, I'm going to use his first name because it is so much more badass sounding than Lapierre), backhand, forehand, stretch the twine.  Yes Virginia.  There is a Santa Claus.  Blues cut their deficit to only two goals, with two thirds of the period remaining.  For those of you keeping track at home, that is Berglund's first goal in 23 games and his 2nd of the season.  And he scored it while centering the 4th line.

The Blues last hope was a power play at the end of the game.  Ducks either stood up the Bluenote at the blue line or beat them for the puck along the boards.  Even pulling Elliott for a 6-4 advantage did not do much to change this course of history.  Ducks end up with an empty net.  Blues lose 5-2.

For those of you who are expecting some #fancystats here is the Fenwick chart from tonight's game (courtesy of ExtraSkater). 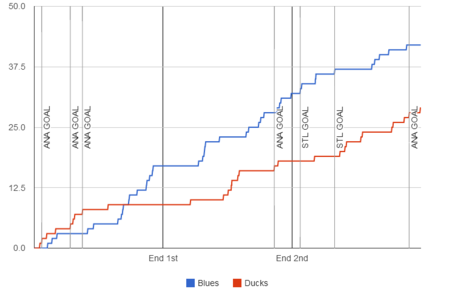 "But this shows the Blues out Fenwicking the Ducks.  And the Blues still lost.  Fancystats is bullshit."

This is a prime example of "score effect."  Since the Blues are down 3-0 from the start of the game, they just throw everything and their mother at the Ducks' net.  The Ducks, having a three goal lead, can play more defensively. When you want to look at a team's Fenwick or Corsi to gauge their puck possession or scoring chances, it is usually best to use the "close" stat.  Close simply means you are only counting fenwick (or corsi) events when the score is tied or within one goal during the first two periods, and tied during the third.

Sorry I don't have your tweets to share tonight like RealBadRobot usually does.  I was lazy (hey! kind of like the Blues tonight) and was only using one computer.  So it was either watch Twitter or watch the game (I should've just watched Twitter).  But here is my pick for tweet of the night.  At least someone got something out of the game this evening!

@GTBradLee we got Bingo and my daughter said "Where do we pick up our prize?" Haha pic.twitter.com/EnpSOvk8jA