"Binnasty" racks up his first pro goose egg for Kalamazoo, while the Wolves match the parent team's futility on Saturday night.

The question posed in last night's print edition of "Game Time" was: "What now-defunct team in a now-defunct league was the first Blues’ affiliate to win a league championship?"

The answer is, the 1971-72 Denver Spurs of the old Western (Pro) Hockey League. The Spurs, coached that season by former Blues' defenseman Jean-Guy Talbot and featuring Blues' prospects such as goaltender Bob Johnson (son Brent later tended goal for the Blues), defenseman Glenn Patrick, and forward Floyd Thomson, led the six-team circuit from start to finish. Following a 44-20-8 regular season, the Spurs swept the San Diego Gulls 4-0 in the first round of the Lester Patrick Cup playoffs, then defeated the powerhouse Portland Buckaroos four games to one for the title. 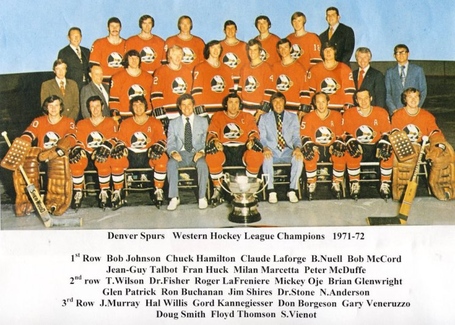 ROSEMONT, IL --- The Chicago Wolves scored twice in the third period to take the lead, but Oklahoma City answered with four goals in the final six minutes to seize a 5-2 victory Saturday night at Allstate Arena.

Forwards Sergey Andronov and Pat Cannone produced goals for the Wolves (10-10-0-2), who lost despite outshooting the Barons 41-23.

"Different night, same story," said Wolves head coach John Anderson. "We are just not scoring. And until we do start scoring consistently, the outcomes aren't going to change."

PAW PRINTS: After starting November with five wins in six consecutive starts, Jake Allen is just 1-3-0-1 in his last five appearances ... In that stretch, "Jake The Snake" has allowed 13 goals on 120 shots in 300 minutes of playing time for a 2.60 GAA and save percentage of 89.2% ... Winger Sebastian Wännström, who scored three goals (including a game-winner) and was a plus-5 in a brief two-game demotion to Kalamazoo, still has not seen action since being recalled to the Wolves on Nov. 17.

Breaking up the shutout bid of Jordan Binnington, Brandon Hynes scored with 46 seconds remaining to close out the scoring. Binnington (5-4-0-0) finished the game with a career-best and K-Wings season-high 43 saves.

The two teams finished the game with a combined 88 minutes in penalties with 54 of the minutes occurring in the final 36 seconds.

Kalamazoo defeats Gwinnett 4-3 in a shootout

DULUTH, GA --- Despite needing more than 60 minutes the Kalamazoo Wings extended their unbeaten streak (3-0-0-1) to four games with a 4-3 shootout victory over the Gwinnett Gladiators.

GREENVILLE, SC --- Jordan Binnington made 36 saves to record his first professional shutout as the Kalamazoo Wings raised their unbeaten streak (4-0-0-1) to five games with a 2-0 victory over the Greenville Road Warriors.

WING TIPS: Binnington and his opponent on Saturday night, Greenville netminder Scott Stajcer, are no strangers to one another ... The two were teammates for three seasons (2009-10 through 2011-12) with Owen Sound of the OHL ... Binnington has six of the team's 10 wins, and has registered a 2.28 GAA (13th overall) and 92.6 save percentage (12th overall) ... Rookie LW Yannick Veilleux scored in the shootout Friday night to help the K-Wings get their win vs. Gwinnett.