The refs in tonights Blues/Red Wings games missed calls for both sides and came up with some interesting interpretations of penalties as well. This is a classic example of what could have been an enjoyable game had both sides been allowed to play.

Share All sharing options for: Blues At Red Wings Game Recap: Blues Lose 5-3, Backes Ejected For Hit To The Head

UPDATE: In the "Fat lot of good this does" category of things comes word that the NHL has rescinded the match penalty on Backes from last night. Blah blah moral victory blah blah clean slate for Backes. Actually, sarcasm aside, that last part is a good thing, because if he actually were to hit a guy in the head now he wouldn't have a prior history.

Still, you guys at the league office want to let that game be re-played with real refs so it's actually a watchable, enjoyable game?

I would prefer to spend any game recap looking at the goals scored by both the Blues and the opposition, breaking down the plays. I'd rather discuss how the Blues looked tired on the second game of a back-to-back (though tonight they, for the most part, didn't). I'd much rather blame a loss on the team's play, but tonight that's different. Tonight I think that the refs deserve a look.

They missed calls against both the Blues and the Wings. They made up penalties for both the Blues and the Wings. And, finally, they saw a penalty that changed the entire course of the game that never happened. Sure, the Blues took some stupid penalties that put them at a disadvantage -- David Perron is a penalty machine so far this season, and not in a useful way. But this, this is inexcusable, and not on the Blues' part.

Now, keep in mind when you watch this that these are the FoxSports Detroit broadcasters calling this game. They're trying to figure this out as much as all of us were when it happened:

Was it a big hit that knocked the wind out of David Backes' former teammate, Kent Huskins? Absolutely. Was it late? Yeah, it could have been planted sooner. Was there contact with the head? No. Nowhere did Backes' body make contact with Huskins' head. But since the "NHL is taking hits to the head seriously" then the law had to come down on Backes.

Let's look at some screen grabs of the moment of contact, shall we?

Ok, that seems like Backes is leading with his shoulder to Huskins' chest. 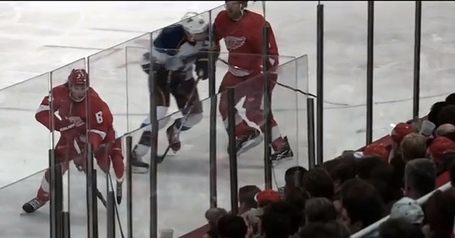 From a different angle before the hit, Backes isn't even aiming at the head. 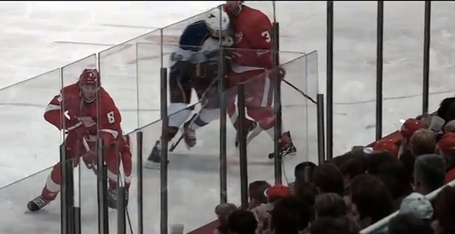 And at the moment of impact, there's also no head contact. It's even more obvious if you blow it up: 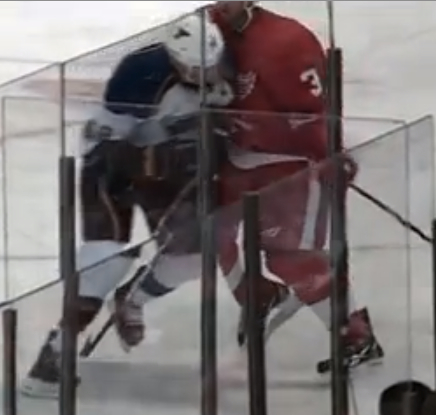 I will never defend an illegal hit to the head by one of our players. It's dangerous and has no place in the game. However, this is, at worst, a late hard hit delivered to the chest of Huskins that obviously knocked the wind out of him and may very well have made his head snap back -- the video seems to show it doing that. But the head didn't snap because of contact with it; it snapped because of the strength of Backes' hit to Huskins' midsection.

The ensuing five minute powerplay for the Wings helped them score the game winning goal. Are the refs in the bag for Detroit? Heck no. They screwed both teams over equally badly up until this point; this was just flat out idiocy.

I wouldn't be shocked to see Backes' penalty get rescinded, but a fat lot of good that does. This would have been a good game that was fun to watch, win or lose, had these refs not had their heads up their asses for an hour. I try not to complain about the refs, and I don't look for conspiracy theories, but things like this completely rub me the wrong way.

The Blues' next game is Tuesday night at home against the Nashville Predators. Here's hoping they rest up, and here's hoping that between now and then the NHL ups their refs' vision insurance plan.