Lighting The Lamp: Fanning the Flames

Share All sharing options for: Lighting The Lamp: Fanning the Flames

Talk about your dramatic ups-and-downs! This post-lockout, shortened season has already provided more thrills and chills than an entire season of The Walking Dead. The St. Louis Blues won six out of seven out of the gate and looked like a truly elite team, outscoring opponents 28 to 14. After feeling cheated out of at least a point in Detroit after a phantom five-minute penalty to David Backes, it looked like a good time for the Note to pick up some points in the standings with a four game home-stand. However, the wheels came off the zamboni as decent goaltending disappeared (except for perhaps the L.A. game) and the Blues lost all four (albeit one in a shootout), outscored 21 to 8. Yikes! Fans are already jumping off the Blue bandwagon, thinking there are more zombies on the Blues' roster than on the hit AMC television series.

So, it's on the road, again, which is really the best thing right now for the Blues, who desperately need to get their mojo back by getting away from home and rediscovering their game on the road. And that back-to-basics method simply means grinding it out with more hard work than both the Flames and Canucks in the next two games. After all, that was the approach last night in Detroit as the Blues limited the shots against rookie goaltender Jake Allen to18 and battled hard against the Wings, out-hitting them 33 to 18. The Note fought back from a two-goal deficit and outworked Detroit after a sloppy first period, scoring short-handed and on the power play as both special teams excelled. Just as Red Wing rookie goaltender Petr Mrazek debuted last week with a victory over the Blues, Allen stood tall in net and played well, making several spectacular saves, especially on pesky Pavel Datsyuk. As a result, Jake earned his first NHL victory and gained a measure of revenge for St. Louis from the Red Wings. 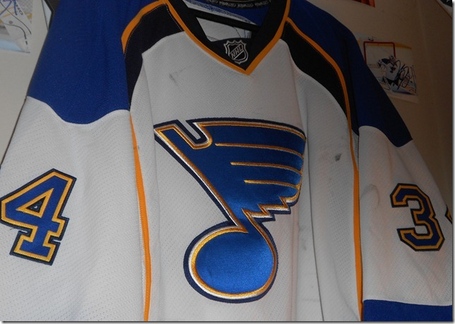 And so, on to Calgary, where the Blues have not fared so well the last two seasons, only winning one of four games, that coming in February a year ago when Jason Arnott scored two goals in a 3-1 victory. Prior to that, the Blues had not won in Calgary since they defeated the Flames 2-0 in January, 2010 (bonus points go to anyone who can remember which Blues' goaltender got the shutout). In fact, the stingy home-ice defense of the Flames has limited the Blues to a mere 24 goals in 14 games since the lockout of 2004/5, less than two per game. The Blues defense had better be prepared for the Calgary offense, though, as the Flames have scored 39 goals in those 14 games, an average of almost three per game. The math clearly shows what kind of game to expect.

The rivalry with Calgary began in 1981, although games against the Flames franchise began in 1971. That's because the Flames were born in Atlanta, Georgia, when the NHL expanded in an effort to thwart the rival major-league World Hockey Association from forming in 1971. The NHL had just expanded in 1967, yet awarded a franchise in New York (the Islanders) to prevent the WHA from placing a team, the Raiders, on Long Island. To balance out the divisions and schedule, a franchise was also awarded to real estate magnate and developer Tom Cousins (also owner of the NBA Hawks) at a cost of six million dollars. The Islanders finished last in the East Division with only 12 wins. On the other hand, Atlanta finished ahead of the West Division California Golden Seals with a respectable 65 points (also more than established teams such as the Canucks and Maple Leafs), mostly due to the ingenuity of General Manager Cliff Fletcher, who had previously worked with Lynn Patrick and Scotty Bowman in St. Louis. 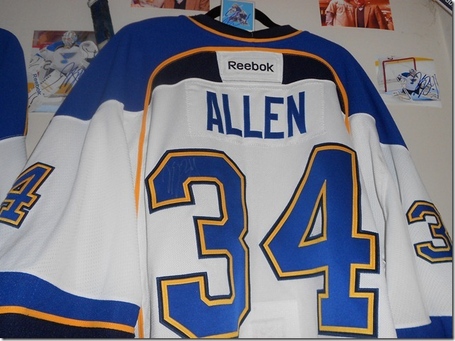 Autographed by Jake Allen at the top of the 3

After eight seasons, the Atlanta Flames were at best an average team, winning only eight times more than they lost (in over 600 games) with a playoff record of 2-15 in six years. Citing low attendance and significant financial losses (over $12 million) and unable to attain a television contract, Cousins announced he would sell the team in 1980. In May, Canadian businessman Nelson Skalbania headed a consortium that paid a record $16 million for the franchise and moved the Flames to Calgary, Alberta. Skalbania chose to keep the Flames name, thinking it would be a good fit for an oil town like Calgary, and replaced the flaming "A" logo with a flaming "C". The logo is still in use today, although a small flaming "A" patch on jerseys is used to identify the assistant (or alternate) captains of the club. The Flames were an immediate hit as fans snapped up 10,000 full- and half- season ticket packages in the 7,000 seat Stampede Corral. In 1983 the newly constructed 16, 605 seat Olympic Saddledome (now the Scotiabank Saddledome) became the home of the Flames. Since the lockout, the Flames have sold out every single game at the Saddledome, even though they have not qualified for the playoffs since 2009.

The Blues will have to continue to play a grinding, blue-collar game and work hard like they did in Detroit if they hope to defeat the Flames tomorrow night (and the Canucks Sunday) and earn their way back to respectability in NHL circles and in the Western Conference standings. Concentration on defensive responsibilities and less concern with scoring statistics will pave the way for playing with confidence and getting better results on the scoreboard. The boys know what to do; the problem is simply getting them to do it.