Like the Blues, the visiting San Jose Sharks came out of the gate this shortened season with a bang. The boys in teal and black won their first seven games in a row, outscoring opponents 29 to 12. (St. Louis was 6-1, outscoring opponents 28 to 14.) And like the Blues, it quickly fell apart as January turned into February; San Jose proceeded to lose their next seven in a row, albeit one in overtime and two in shootouts, outscored 8 to 21.

After a sloppy, listless loss in Chicago last Friday, the well-rested Sharks are ready to get back on track at the expense of the road-weary Blues tonight.

Nor are the Sharks the first NHL team in the Bay Area. That distinction belongs to the California Seals, who (like the Blues) joined the NHL as an expansion team in 1967. Wall Street investment broker Barry Van Gerbig, a good friend of NHL owners Bruce Norris (Detroit), Weston Adams (Boston) and William Jennings (New York), assembled a strong conglomerate of investors including Bing Crosby (his godfather), 49ers' quarterback John Brodie and Nelson Doubleday of the famous publishing company. Due to poor attendance, rising expenses and lack of profits, though, Van Gerbig sold the franchise to Charles O. Finley in 1970. Finley was a successful insurance broker who had previously bought the Kansas City Athletics and moved the baseball team to Oakland. "Charlie O" renamed his new club the California Golden Seals, changed team colors to green and gold and had his players lace up white skates. 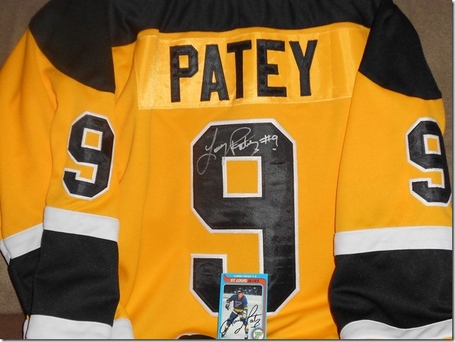 In 1974, Gordon and George Gund III became majority owners and eventually got league permission to move the franchise to Cleveland (the Barons) in 1976. A 1978 merger with the Minnesota North Stars (a franchise the Gunds also owned) didn't improve the team, which the Gunds desperately wanted to move to San Jose. By the late 1980s, a solution was worked out in the smoky, back-rooms of the NHL owners in which the Gunds would sell the North Stars/Barons to a group headed by Harold Baldwin (former owner of the Hartford Whalers who would later purchase the Pittsburgh Penguins in 1991 after selling the North Stars to Norm Green, who moved them to Dallas) and in turn receive an expansion franchise for the San Francisco Bay Area to play in a fabulous new arena in San Jose.

A contest to name the new team saw thousands of names submitted by mail. While the first-place finisher was "Blades", the Gunds, concerned with the negative association with a weapon, instead chose the runner-up "Sharks." The new arena (now the HP Pavilion at San Jose, a.k.a. The Tank) wasn't quite ready, though, and the Sharks began NHL play at the antiquated, tiny Cow Palace in 1991. Although their initial roster consisted primarily of NHL journeymen, the Sharks acquired one notable player in 14-year veteran and Norris Trophy winner Doug Wilson from Chicago. Wilson was the first captain and first All-Star representative of the Sharks. When the Sharks moved to The Tank in 1993, new coach Kevin Constantine pulled off the biggest turn-around in NHL history, finishing with 82 points, a 58 point jump from the previous season.

In 2002, the Gunds sold the team to a group of local investors headed by Greg Jamison, who lured Doug Wilson back as general manager the following year. Wilson hired Ron Wilson (no relation) as the new coach and the Sharks were the third best team in the entire league with 103 points, winning the Pacific Division. In the 2003 playoffs, the Sharks made it to the Conference Finals, yet were defeated in six games by Calgary. The Sharks would finish first or second in the division for four seasons in a row under Wilson, yet could not fulfill expectations in the playoffs, losing in the second round the first three seasons after the lockout of 2004-05. The 2005-06 season was notable as a slow start led to a trade with the Boston Bruins, in which center Joe Thronton joined the Sharks. At season's end, Thornton would win both the Hart and Art Ross Trophies. San Jose would make the playoffs every year since then, yet failed to make it to the Stanley Cup Finals. They were ousted in the first round last year in five games by the Blues.

Considering both teams only scored 14 goals in four regular season games last year (the Blues won all four, scoring 11 goals), bet this one "under" with special teams (and hence penalties) determining which club wins a close, tight game.