Lighting The Lamp: Hockey Before The Blues

Share All sharing options for: Lighting The Lamp: Hockey Before The Blues

A great majority of hockey fans in St. Louis today have many fond memories of the Blues that keep them coming back for more. Veteran fans easily remember the days when Glenn Hall and Jacques Plante guarded the net and Noel Picard and Bob and Barclay Plager made life miserable for opposing forwards. The scoring exploits of Red Berenson and Garry Unger were matched over the years by players such as Bernie Federko and Brian Sutter, as well as more modern stars like Brett Hull and Adam Oates. Today's warriors continue the tradition as yet another generation is thrilled by the scoring antics of T.J. Oshie, Patrik Berglund and Vlad Tarasenko. However, most fans today don't realize the Blues were not the first NHL team in the Arch City. That distinction belongs to the St. Louis Eagles.

Back in the days of the Great Depression, hockey teams struggled to make profits as they competed for a short supply of entertainment dollars. The Ottawa Senators were no exception. Born as the Ottawa Hockey Club in 1883 and nick-named the Senators in 1908, Ottawa was an founding member of the NHL in 1917. Generally acknowledged as one of the greatest teams in the early days of the league, the Senators won four Stanley Cup championships during the 1920s. Counting championships before the NHL was formed, the Ottawa HC won the Cup eleven times. Unfortunately, Ottawa was the smallest market in the NHL, roughly one-fifth the size of Toronto, which was the league's second smallest market. As early as 1927, the team sought financial assistance from the league even though the won the Cup that year. By 1930 the team was openly selling off star players to other teams to make ends meet. Rising costs and low attendance forced Ottawa to suspend operations for the 1931-32 season. The Senators returned the next two seasons, yet finished in last place and as attendance continued to drop, it became clear the team would have to more to a larger city with a modern, spacious arena. So, in 1934, the franchise was moved to the Mound City, home of the St. Louis Arena. Taking note of the popular Anheuser-Busch brewing company's logo, the team was renamed the Eagles.

The new NHL club in St. Louis only lasted one year. The same problems that plagued Ottawa were repeated as low attendance and rising costs (especially those concerning train travel to distant NHL cities) forced the team to sell players such as leading scorer Syd Howe (to Detroit) and Frank Finnegan (to Toronto). To make matters worse, the Eagles finished in last place, the lowest scoring team in the league. After losing over $70,000, the franchise was purchased by the NHL and disbanded.

Almost no one remembers there was a professional hockey team in St. Louis before the Eagles. In 1928, a group of local sportsmen purchased a franchise in the minor-league American Hockey Association and introduced the Flyers at the Winter Garden rink on DeBaliviere Avenue. The Flyers moved to the newly constructed Arena the following year and would play there (except for the year the Eagles existed) until 1953. Clad in gaudy red, white and blue uniforms (complete with stars), the Flyers were very popular, drawing large crowds. Strong leadership provided by local sportsman E. C. Steffen turned the club into a powerhouse with star players including defensemen Joe Matte and Leo Carbol, centers Alex (Shrimp) McPherson and Walter Brenneman and wingers Cliff (Fido) Purpur (who also played for the Eagles), Don Olson and Pete Palangio. The Flyers won six regular season titles and five playoff championships in fifteen years. In 1944, the Flyers joined the American Hockey League. They only finished in first place once (1948-9) and never won a playoff championship in nine seasons, disbanding in 1953. 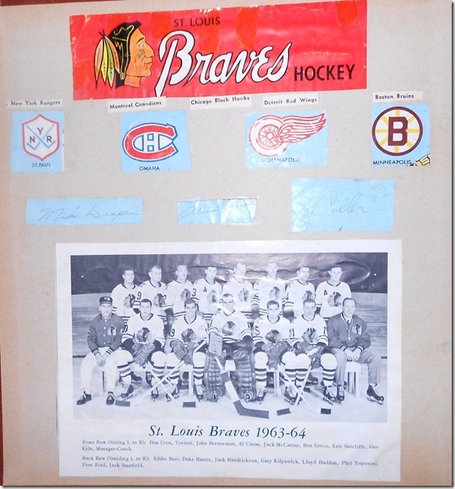 Professional hockey would not return to St. Louis until 1962, when the Chicago Blackhawks transferred their farm team from Syracuse, N.Y., to the Arena. In the first full season (1963-64), Alain (Boom-Boom) Caron led the team (and league) with 77 goals (and 48 assists), capably set up by centers Ray Cullen and none other than a young Phil Esposito (26 goals and 80 points in 43 games). John Brenneman (son of Walter), who would go on to play for the Blackhawks, Rangers, Maple Leafs, Red Wings, Seals and Barons, scored 28 goals. Gary Kilpatrick, Jack Hendrickson and Lloyd Haddon starred on defense and 1960 Olympic star Jack McCartan provided excellent goaltending. The coach of the Braves was former Ranger and Bruin Gus Kyle, always good for a quote or funny remark, who would go on to pair up with Dan Kelly for two decades as the radio voice of the Blues. Other notables in the four year history of the Braves included Camille (The Eel) Henry, Dennis Hull, Lou Angotti, Freddy Stanfield, Art Stratton, Wayne Maki, Pat Stapleton and goaltenders Dave Dryden and Denis DeJordy. The Braves would miss the playoffs two years and lose in the first round the other two years, yet were a remarkable and highly entertaining group of hockey players who provided many thrills and chills for St. Louis hockey fans. 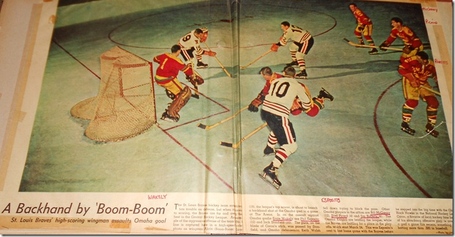 So, yes, even outside the Blues, St. Louis has a rich, storied hockey heritage that five generations of Blues fans have enjoyed over the years. Thank you, hockey gods.