Both Edmonton and St. Louis are on the second end of back-to-backs, but at least the Oilers have to travel.

The Blues can shake off last night's game and come back today against the Oilers, right? Right. Of course, not letting all of the players that are out get to them would be nice as well. Sure, they're missing a line, but you can't just go "eh, we're going to lose, so let's be as flat as possible anyway." You really can't do that against the Oilers, who just defeated the Dallas Stars 5-1 last night.

Sure, Edmonton doesn't have a defense, but based on some of the plays we've seen recently, neither do the Blues. Do they have a solid starting goalie? No, but tonight Brian Elliott's in to try to get back on track, so the Blues apparently might not have one either.

The Oilers are good and young and while they might not be tearing it up right now, they have a very bright future ahead of them... which is basically what people were saying about the Blues a few years ago. Bright futures are great, but sometimes shit happens en route to that bright future, and you have to learn to cope with it. Now's that time for the Blues.

Check back later for a Lighting the Lamp, maybe some Three Questions with Derek or someone from The Copper & Blue, a preview, a GDT, and a recap. Hopefully the Blues will be a little less of this tonight: 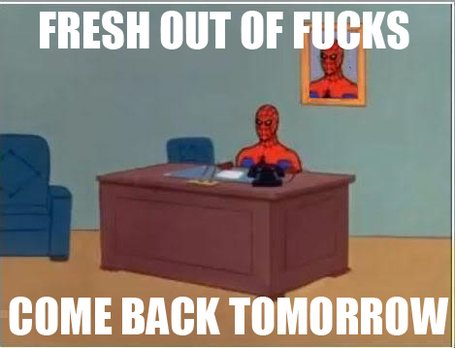 Well, we're back, and it's tomorrow. Give one. Let's go Blues.

Oilers At Blues GameDay Storystream: Will The Blues Bounce Back?