Lighting The Lamp: From Jets To Coyotes

Share All sharing options for: Lighting The Lamp: From Jets To Coyotes

Lighting the Lamp With Rick Ackerman

The surprisingly resilient Phoenix Coyotes trot into town tonight with revenge on their minds. The Blues collared them in front of their fans in Phoenix a week ago as Chris Stewart enjoyed a four point night and Jake Allen starred with 23 saves, many of the spectacular variety, in a 6-3 rout. With nearly identical records, including goals for and against, St. Louis and Phoenix are evenly matched, although the Coyotes play better at home and the Blues play better on the road. The Note desperately needs to improve on home ice and make the TradeStocks Center a rink NHL opponents fear and dread visiting, as was the case last season. Home-ice dominance is a must if the Blues are to qualify for the playoffs and make a serious run for the Cup. So far, this season has been tough on Blues Nation as the boys in blue suffer from inconsistency and the inability to play a 60-minute game.

The Coyotes were actually founded in 1972 as the Winnipeg Jets. Successful expansion in 1967 that doubled the size of the NHL prompted the formation of a rival professional league, the World Hockey Association in 1971. The founders of the WHA, American promoters Dennis Murphy and Gary Davidson, hoped to capitalize on the lack of professional hockey in a number of large metropolitan areas, including Ottawa (Nationals), Houston (Aeros), Cleveland (Crusaders), Quebec (Nordiques), Edmonton (Oilers) and Winnipeg. The new league was not considered much of a threat until the Jets shocked the hockey world by signing superstar Bobby Hull to a five year million dollar contract with a million dollar signing bonus. The Jets were the most successful WHA team, winning three Avco Cup championships, led by Hull, centers Ulf and Kent Nilsson and winger Anders Hedberg. Former Blues that played for the Jets included Norm Beaudin, Chris Bordeleau, Ab McDonald, Fran Huck, Gerry Odrowski, and goaltender Ernie Wakely. 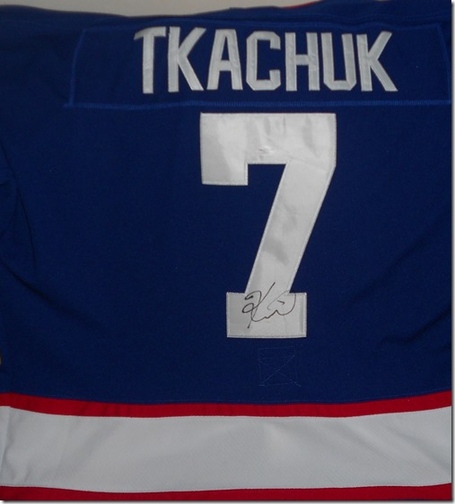 The Jets were absorbed into the NHL when the WHA folded in 1979. but could never translate its success in the WHA to the NHL. With their best players lost in a reclamation draft, the Jets finished with the worst record in NHL history (only nine wins in 1980-81). They improved to make the playoffs 11 times in the next 15 years, but could only win two series. Spiraling player salaries and operating expenses combined with the weak Canadian dollar to force the Jets' owners to finally accept an offer to purchase the franchise from a group in Phoenix, headed by Richard Burke and minority partner Jerry Colangelo, owner of the NBA's Phoenix Suns. The NHL's smallest market (with the smallest arena) could just not compete financially.

A fan contest provided a new name and identity for the team from Canada and the Phoenix Coyotes started play in the NHL in 1996. Dynamic center Jeremy Roenick joined Keith Tkachuk, Rick Tocchet and Shane Doan to lead the desert dogs to six consecutive winning seasons, earning a playoff berth every year but one. Unfortunately, the franchise did not win a playoff series in Phoenix, the closest being 1999 when the Coyotes lost a heart-breaking game seven in a first round series to the Blues. Into the new century, the team became less and less competitive and fans started to stay away as the team floundered and lost game after game. Operating losses reached up to $40 million a year.

To make matters worse, the American West Arena was hardly suitable or adequate for hockey and it wasn't until 2003 that a new facility, the Glendale (now Jobing-dot-com) Arena was completed. Wayne Gretzky joined the franchise in 2000 (with free agent Brett Hull following in 2005), but even the Great One could not create decent on-ice performance and the team, as well as attendance, spiraled downward yet again. By 2008, it was made public that massive losses forced the NHL to directly fund the Coyotes organization and a year later the team declared bankruptcy. Two potential buyers were identified during hearings in Phoenix bankruptcy court, however the court voided a planned sale to Jim Balsillie (Mr. BlackBerry) of Hamilton, Ontario. So, the NHL bought the team and assumed all debts, negotiating a temporary lease with the city of Glendale. In 2010, a consortium of investors led by Chicago businessman Matthew Hulsizer reached a deal with the NHL, yet that fell apart when the Goldwater Institute of Phoenix threatened a lawsuit over municipal financial interests pertaining to the sale. The franchise remains in limbo, essentially owned and controlled by the NHL.

This is a crucial home-stand for the Blues and they simply must begin to consistently dominate on home-ice if they seek to seriously contend for Lord Stanley's Cup. Putting a muzzle on the Coyotes would further that goal.