The Blues will be T.J. Oshie-less for tonight, but that doesn't mean that they still can't take it to the Coyotes.

No Oshie? No problem! Well, ok, we hope no problem. The Blues have been bitten hard by the injury bug recently; it's not like it's something that they haven't dealt with before, but it's still something that no one would like for them to deal with. Despite the fact that this is fast becoming an annual conundrum, and something that the Blues have learned how to deal with, it's more worrisome in this shortened season. There are fewer games to make up any lost ground.

Thankfully, Alex Steen's been activated off of the IR for tonight, so maybe that'll balance off the team sans-Oshie.

The Blues are smack dab in the middle of the playoff hunt, and so are the Coyotes. Tonight boils down to which team plays harder, and both teams have an incentive to play their rear ends off. Phoenix has an extra, shinier incentive than the Blues do, though: 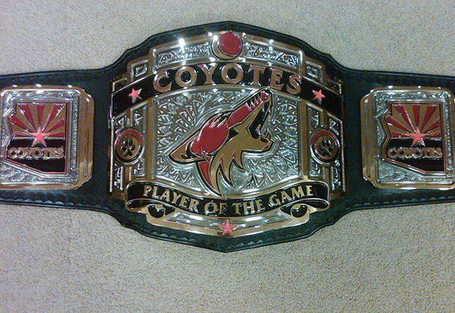 Eat your heart out, weenie hat.

This is your game day thread. Cheer the Blues on, and hope that they don't give the Coyotes a chance to pass around that God-awful thing. Yeesh. Also, if you'd like to join us, we're having dinner pre-game at the Flying Saucer.

Coyotes At Blues GameDay Storystream: Will The Scoring Repeat?