Lighting the Lamp: The Birth of the Blues: The Untold Stories

Share All sharing options for: Lighting the Lamp: The Birth of the Blues: The Untold Stories

It's common knowledge that the St. Louis Blues franchise was born in the NHL expansion of 1967 when the league doubled in size and finally spanned the continent from coast to coast. And most fans today are aware that the Blues were backed financially by a consortium led by Clayton insurance brokers Sidney Salomon, Jr. and his son, Sidney Salomon III. However, there are details and circumstances behind St. Louis acquiring a major league hockey team, much to the chagrin of fans in Baltimore. The inside stories bear telling. 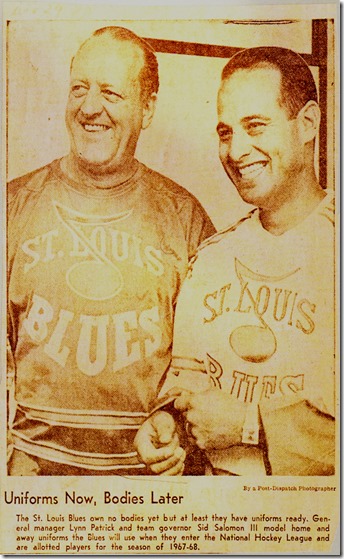 It took roughly ten years for the television industry to affect the business of NHL hockey as it revolutionized the entertainment capital of Hollywood in the 1950s. A national television contract is what drove the NHL to double the number of teams in the league with the expansion of 1967 that gave birth of the Blues. After 24 years of rigidly resisting change (the Brooklyn Americans franchise was dropped in 1942, leaving six "original" teams), the moguls of the NHL decided to open up their cozy, exclusive, little club. How could they attain a national television contract with only six teams, the furthest city west being Chicago? They couldn't, especially with no franchise on the west coast. Every other major sport had already established television contracts and the NHL could not call it self a major league without one. So, in February, 1966, NHL President Clarence Campbell announced the Board of Governors had awarded five new franchises and one "conditional" franchise, doubling the league to twelve teams. The new clubs would all play in the same Western Division (all six established teams in an Eastern Division) starting in 1967. 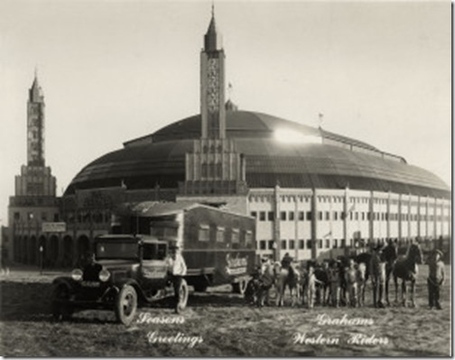 Solid ownership and suitable venues for play allowed Philadelphia, Pittsburgh, Minnesota, Los Angeles and California (San Francisco Bay area) immediate entry into the league. St. Louis was only awarded a conditional franchise since suitable ownership had not yet been found. Nevertheless, the Mound City was chosen over Baltimore, the odd-man out in considerations for the new franchises. And the reason St. Louis was chosen even without an established ownership group was the white elephant at 5700 Oakland Avenue, the St. Louis Arena. Built as an exhibition hall for the National Dairy Show in 1929, the grand Old Barn also hosted hockey and basketball games and was the home of the St. Louis Eagles (NHL) and St. Louis Flyers (AHL). In 1947, Chicago's American Furniture Mart purchased the building and grounds, 63 acres nestled between Forest Park and The Hill, for a reported $1,800,000. The American Furniture Mart was owned by business partners of 27 years Arthur M. Wirtz (owner of the Chicago Blackhawks) and James D. Norris (owner of the Detroit Red Wings), who immediately set up The Arena Corporation to run events at the building. In 1962, the Arena became the home of the St. Louis Braves (CPHL and CHL), a farm team of the Blackhawks.

After almost twenty years of neglect from out of town ownership, the run-down, antiquated Old Barn was but a pale reflection of her former grandeur and granting St. Louis an expansion team was a brilliant way of unloading a near-worthless relic on a willing buyer. Although there were two legitimate offers from groups outside St. Louis, Wirtz had to have a local owner. In an interview with the Post Dispatch's Bill Beck, Wirtz said, "There is no question that the NHL would prefer local ownership. I went to St. Louis in an effort to interest men whom I knew to be qualified and acceptable. I remember going to a couple of country clubs, one of them so wealthy it could afford to have a log cabin for a clubhouse. None of those men expressed the slightest interest." His reference, of course, was to the extremely private (and segregated by race and religion) Bogey and Log Cabin Clubs off Clayton Road in Ladue and the St. Louis Country Club off Price and Ladue Roads. Wirtz continued, "Since that time, I have not received a single inquiry from anyone in St. Louis, either in regard to the lease or purchase of the Arena."

One local group, however, was Catch-22'ed from consideration. Restaurateur Biggie Garagnani announced he had formed a suitable group of 16 investors, including Cardinals' star Stan Musial, who could provide the necessary financing to purchase the franchise and Arena. However, Garagnani said he did not file a formal, official application because the NHL required that he show ownership of a suitable venue for NHL hockey before the application could be processed. He also reported that he had made a formal request to Emory Jones, local President of the Arena Corporation, to speak to Wirtz and Norris. Jones admitted this was true and he had referred the request to Wirtz and Norris. As related to Beck, "I saw Jones in my place (Musial and Biggies steakhouse, just east of the Arena at 5130 Oakland Ave.) the other day," Garagnani said. "I said, 'Emory, how about my meeting?' All Jones said was, 'Biggie, it's snowing outside.'" Later asked about Biggie and Sid Salomon Jr., Wirtz said he had not heard from either. "I have heard about the St. Louis restaurant man. Maybe he has contacted Norris. But Jim is busy trying to win hockey games. I am in charge of the real estate." 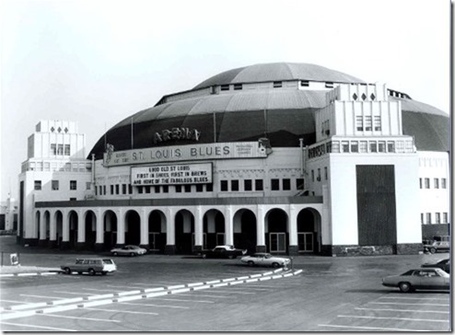 In the meantime, two groups of investors from Chicago were seriously considered, but they balked at the $4 million price tag on the Arena (on top of the $2 million franchise fee). Under pressure from the league to find a legitimate owner, Wirtz finally capitulated and sold the arena to the consortium headed by the Salomons. And he got his $4 million, although only 16.3 acres came with it. The Salomons were awarded the franchise on April 5, 1966 at a cost of $3,000,010, including a guarantee of $1 million for operating expenses and a $10 thousand application fee. And it cost roughly another $2 million to renovate the Arena (including a new state of the art $60,000 scoreclock), bringing the total investment to $7,000,010. Salomon's expensive new team was immediately dubbed "The Blues" as an homage to the city's rich music history and composer and musician W. C. Handy, widely known as "The Father of the Blues". When asked if they were worried Handy's estate might sue over any possible copyright violations, both Salomons reportedly claimed that would be just wonderful as the publicity from possible lawsuits would get the new hockey club a lot of good national attention and publicity. The ten-man syndicate included prominent St. Louis businessmen James R. James, Lester Crown, Louis W. Menk, James P. Soult and most importantly, investment bankers Elliot H. Stein and Robert L. Wolfson, who worked out all the financial dealings.

Lynn Patrick (HOF 1980), son of Hall of Famer Lester Patrick and father of Craig Patrick, former Blues player and Coach and General Manager of the Pittsburgh Penguins, was wisely brought in as the Blues first General Manager and Coach, ably assisted by former Ottawa Junior Canadiens and Peterborough Petes (both farm teams of the Montreal Canadiens) 32 year old coach Scotty Bowman. Cliff Fletcher was also added from the Canadiens as the Blues' Chief Canadian Scout. Fletcher would go on to become General Manager or an executive officer for several NHL teams, including Atlanta/Calgary Flames, Phoenix Coyotes, Tampa Bay Lightning and Toronto Maple Leafs. Former minor league player and trainer for Brown University, Tom Woodcock was the first Head Trainer and former player and coach Gus Kyle was appointed Director of Sales. Kyle also teamed up with Jack Buck (the first year) and later Dan Kelly as the radio voices of the Blues on KMOX.

So, ultimately, hockey fans in St. Louis owe a huge debt of gratitude to the despised, hated Blackhawks and Red Wings, who helped create the Blues' hockey club by coercing two Jewish insurance brokers and two Jewish bankers into over-paying for the white elephant on Oakland Avenue in order to purchase the franchise in 1966. In hindsight, they should have added Garagnani and Musial to the group for obvious reasons, especially since hockey players ate a lot of steak at a time when it was considered healthy and beneficial.