Lighting The Lamp: The Great One And The Next Ones?

Share All sharing options for: Lighting The Lamp: The Great One And The Next Ones?

The Blues limp home after a rather disappointing three game road trip to western Canada that featured two narrow losses and one extremely well-played victory in Edmonton. Mental mistakes and inconsistent defensive play led to the loss in Vancouver in which the Note allowed three second period goals and then came back a little short (like our good friend, television analyst Darren Pang) with two goals in the third period. Falling behind in Calgary (mostly due to an inability to clear the defensive zone, highlighted by T.J. Oshie's giveaway), St. Louis did catch up (Oshie made up for it with a sparkling unassisted goal), but ultimately lost in the third period when old nemesis Jerome Iginla split the defense on a long pass up the middle and somehow slipped the puck through Jaro Halak from behind the red goal line. Despite out shooting the Flames 38-17 and dominating most of the game (except for the suddenly silent power play), the Blues could not put it away with a timely goal in the third period as Calgary did.

The Blues face Edmonton again after defeating the Oilers exactly a week ago in a perfect road game, 3-0. With that defeat still in their minds, the young Oilers will be looking for revenge and will provide a formidable opponent despite their low ranking in the Western Conference. However, St. Louis has the advantage of being a bit more rested and fresher as Edmonton played a tough game in Nashville last night. The Blues also have the advantage of having their core players a lot more experienced and NHL-ready than the Oilers, who have a plethora of young stars not yet molded into an effective, defensive-minded club capable of winning consistently enough to qualify for the playoffs.

In many ways, the Blues are more comparable to the Edmonton Oilers of 1982 and 1983. In 1983, the Oilers finished with 106 points to win the Smythe Division, tied for second in the entire league with Philadelphia, only four points behind Boston. Those Oilers had been in the league for only four years, transplanted from the World Hockey Association in 1979. Led by Wayne Gretzky and Mark Messier, the Oilers became an offensive powerhouse (admittedly much more so than the Blues today) with the acquisition of players like Glenn Anderson and Jarri Kurri in 1980. Other high scorers included defensemen Paul Coffey and Charlie Huddy, center Ken ("the Rat") Linseman, and winger Pat Hughes. A decent defense featured Coffey, Huddy, Dr. Randy Gregg, Kevin Lowe and goaltenders Andy Moog and Grant Fuhr. There is no Wayne Gretzky on the Blues (or on any other NHL team now, including Mr. Crosby, despite what NHL.com or NBC Sports say), yet the Blues have a Messier-clone in captain David Backes (even if he hasn't so far been the prolific scorer Messier was) and other offensive threats this year such as Chris Stewart, Alexander Steen, David Perron, Oshie, Patrik Berglund, Vlad Tarasenko and Andy McDonald. Alex Pietrangelo may yet develop into the scorer Coffey was and Kevin Shattenkirk isn't that far behind. Barret Jackman and Roman Polak are the defensive stalwarts that match up with Gregg and Lowe and Halak is comparable to Moog, while we can at least hope Jake Allen progresses to become another Fuhr. Despite all that talent, the Oilers lost in the Stanley Cup Finals to the Islanders, swept in four games. 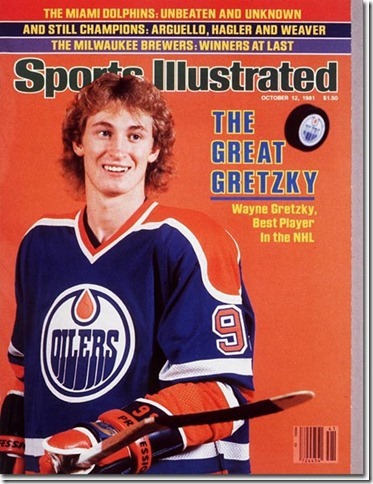 The Oilers ended the 1983-84 season first overall in the NHL with 119 points and went on to defeat the Islanders and finally win the Stanley Cup. Messier won the Conn Smythe Trophy as playoff MVP. Although finishing second overall the following season, the Oilers won a second Cup at Philadelphia's expense with Gretzky accepting the Conn Smythe Trophy. The 1985-86 season ended with the Oilers finishing first overall in the league, but they lost a second round playoff series to Calgary. The deciding goal of the series was scored when Oilers rookie defenseman Steve Smith put the puck into his own net. The following season ended with the overall first place Oilers winning the Stanley Cup yet again. They would also win the Cup in 1988 (defeating Boston) with Gretzky earning his second Conn Smythe Trophy. That made four championships in five years, giving them the right to call Edmonton the City of Champions.

In August, 1988, Gretzky was traded to the Los Angeles Kings. Fearing Gretzky would leave in 1989 as a free agent, owner Peter Pocklington thought it wiser to get assets in a trade rather than lose the Great One for nothing. The Oilers would win one more Cup in 1990 behind MVP goaltender Bill Ranford, yet the mystique was gone and the club would slowly deteriorate as other stars were traded or left for higher salaries as free agents. Even Messier was traded to the Rangers in 1992 (where he won another Cup in 1994). Gretzky would not win a Cup with another team, although he had a chance in 1996 until he coughed up the puck to Steve Yzerman in double overtime of game seven.

It may be wishful thinking to compare today's Blues to the Oilers of the early 1980s, yet the core elements are there for the Blues to compete for Lord Stanley's Cup. It's up to the players to actually do it.