Lighting The Lamp: Blues In For A Wild Time

Share All sharing options for: Lighting The Lamp: Blues In For A Wild Time

The St. Louis Blues journey to the Land of 10,000 Lakes (as a matter of fact, though, there are 11,842 lakes in the state of Minnesota) tonight hoping to continue their run of five straight victories and solidify their hold on the sixth seed in the Western Conference or leap-frog both the Sharks and Kings up to the fourth spot (for home-ice advantage in the first round of the playoffs). Of course, that depends on help from Detroit (where San Jose plays tonight) and Colorado (playing in Los Angeles). It may be difficult for Blues Nation to root for the despised Red Wings, or to expect a good game from the Avs, who played last night in Anaheim. Nevertheless, the Blues still have two games on hand on the Kings and one on the Sharks, which bodes well for earning home-ice advantage, even if the Note has played better on the road this shortened season.

Including tonight's game in St. Paul, the Blues have ten games remaining in the regular season. Only three are on the road, and all three are against opponents lower in the standings. Of the seven at home, four are against teams with fewer points (Phoenix, Dallas, Colorado and Calgary). Of course, that means the Blues only have three home games against two clubs with more points, Vancouver and Chicago. And they end the regular season with three games at the friendly confines of the TradeStocks Center. For those watching clubs with fewer points than the Blues, Columbus (five points behind) only has eight remaining games, Dallas (also five points behind) has nine left, Phoenix (four points behind) has eight remaining, and Edmonton (seven behind) has eight games left. Nashville is eight points behind with only seven games left and has little chance of catching the Blues, while Calgary and Colorado are pretty much out of it at this point, despite the Avs’ surprising victory at Anaheim last night.

Yes, the Blues are on a roll, outscoring opponents 13-5 in the last five games, including impressive wins at Minnesota, Chicago, Detroit and Nashville. Brian Elliott has extended his shutout streak to 129 minutes, 31 seconds, winning four of the five games and sporting a 1.07 goals against average and .960 save percentage during his streak. And it certainly has helped to have the veteran presence of both Jordan Leopold (no goals against in five games) and Jay Bouwmeester (+3 in four games), who have helped by stabilizing the defense and limiting shots against. In the five victories, the Blues allowed 131 shots against, an average of 26 per game. Although that is above their league-leading season average of 24.3, it includes 36 against by a very good Chicago team. Only two other teams (Los Angeles and New Jersey) allow fewer than 26 shots against per game. At the other end of the rankings, Buffalo is worst in the league with an average of 33 shots against per game, followed closely by Edmonton and Ottawa.

The Minnesota Wild have also been on somewhat of a roll since April 1, however, quite unlike the Blues, they are rolling downward. After winning 11 of 15 games in March and jumping up to first place in the Northwest Division, the Wild surrendered the divisional lead to Vancouver by losing the first four of five in April (outscored 12 to three in those four games), including a loss to the Blues. The lone victory was a 3-0 shutout in Columbus.

Minnesota has assembled an interesting team, starting with the big-dollar acquisitions of free agents Ryan Suter and Zach Parise over the summer. They also added forward Jason Pominville from Buffalo at the trade deadline. The combined salary cap hit for those three players, incidentally, is just over $20 million/year. Add players like injured forward Dany Heatley ($7.5M), center Mikko Koivu ($6.8) and goaltender Niklas Backstrom ($6.0) and it is clear the Wild are free spenders with the financial backing to purchase the best team possible (those six players total more than $40M alone). In comparison, excluding newcomer Jay Bouwmeester, no one on the Blues roster has a cap hit of more than $4.8M (Andy McDonald) per year. The Blues top six (including Jaybo) have a cap hit of just under $28M/year. The Wild has also drafted well, adding Finnish center Mikael Granlund, Swedish defenseman Jonas Brodin, Canadian forward Charlie Coyle (actually acquired in a trade with the Sharks), and Red Deer defenseman Matt Dumba, the seventh overall pick in the 2012 amateur draft, who has been likened to Maple Leafs defenseman Dion Phaneuf.

The Blues and Wild have almost identical records going into tonight's contest. Both have 22 wins and two bonus points for a total of 46 points, as well as allowing 98 goals against. The Blues have scored four more goals with one game in hand. The biggest difference is that Minnesota is better at home (13-5-1), while St. Louis is better on the road (13-7-1). The winner tonight will break the tie and take sole possession of fourth, fifth or sixth place depending on what happens in Detroit and later tonight in Los Angeles. The loser will likely (due to possible bonus points) stay in 7th, ahead of the eighth place Red Wings. Those who earlier lamented a shortened season have to be joyous and excited now, as Western Division clubs battle each other relentlessly in order to qualify for the playoffs in a more desirable slot. As things stand right now, the Blues would face Vancouver in the opening round. If they can defeat the Wild (and both the Sharks and Kings lose), and if the playoffs started tomorrow, St. Louis would have home ice advantage and face Los Angeles in the opening round.

It doesn't get any easier for the Blues as they jump down to Columbus tomorrow and then face Chicago in St. Louis on Sunday (remember it's an 11:30 a.m. start). Three games in four nights will be tough, even for the streaking Note.

And as a caption contest, anyone care to give a crack at this one of Tarasenko, Jake Allen, and a special friend in Nashville? 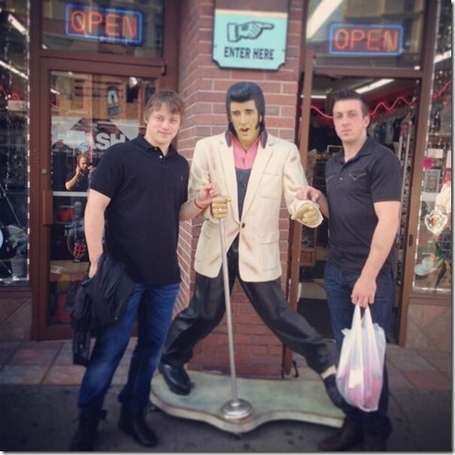