Blues' Grinders Grinding It Out: Why Do We Love The Bottom Six-ers?

The Blues have always been a blue collar, hard working kind of team, but fans of every team love their grinders. What's the deal with our love affair with the fourth liner?

Share All sharing options for: Blues' Grinders Grinding It Out: Why Do We Love The Bottom Six-ers?

It's no secret: Blues fans love their bruisers. Look into the stands on any given day, and mixed in among the Pietrangelo, Hull, Shattenkirk, Gretzky, and Pronger jerseys will always be guys who put up dukes and racked up more penalty minutes than points. Heck, the franchise's most beloved players, the Plager brothers, are just as known for climbing into the stands at Philly and being the inspiration for the Broad Street Bully mindset as they are known for the goals that they scored. How many other teams have something like this displayed proudly in their arena? 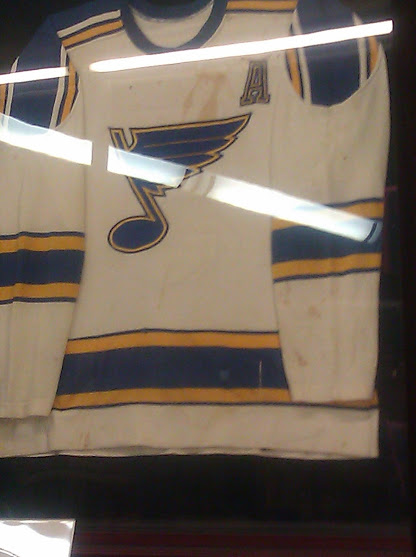 Not many, I assume.

Hockey fans love their hard workers. It's easily arguable that they love them more than the superstars, frankly -- and this might be more true with hockey than any other sport. Why is that though? Why is there this love for the underdog in hockey?

There are a couple of reasons. Despite the fact that hockey is an expensive sport to play, and the fans tend to be a bit more well-off than fans of the other big sports (and smarter, too!), there's the aura of blue collar around the game. A lot of players had parents who scraped together the cash to get their kids involved in the sport; not every NHL player is as blessed as Mike Comrie was as far as family fortunes go. The players come from decidedly working to middle class backgrounds, and they oftentimes cite hard work as the reason for their success than their "natural talent," if that even becomes part of the conversation. Numerous players, grinders and superstars alike, remember where they came from and how their parents sacrificed for them to have the opportunity to play hockey. It's easy to argue that this message and this background resonates with the fans. It's something for them to relate to.

This is where the love of grinders comes into play. We all want to be successful, but most people have a realistic expectation of what they can achieve. We want to be Wayne Gretzky, Brett Hull, Sidney Crosby. We wish we had the natural ability coupled with the work ethic that those players have (or had, in Hullie's case) that lead to their amazing success -- but we've tempered our expectations for ourselves. We're all adults here. We know what we're capable of, and most of us know that we're never going to be the Gretzky of our chosen career path, and that's ok.

What we can be is the best that we can be at what we do, and that's what draws us to the grinders. The amount of work that they've put in to reach the NHL is admirable. Most of them paid their dues in juniors (or college hockey), the ECHL, the AHL, European leagues... you name it. They would play any sort of professional hockey to catch the eye of an NHL scout, or to make the general manager of the team that drafted them sit up and take notice. Admit it - we all do this at some point in our careers. We all go that extra mile or put in extra work for our boss to go "hey, not bad!" so they maybe consider giving us a raise or a boost in hours. This is the same principle with the grinders.

When they score, we score. When that guy who has been busting his ass in the AHL for years gets plunked down on a NHL team's top line because of injury or desperation, that's our big break too. When they score a goal, when they get praised by their coach after the game? Hey, who doesn't want to get called out by their boss for something positive once in a while?

There's a reason that reality TV "stars" are such big celebrities in American culture -- because people can relate to these average (or below average, as the case may be) schlubs who happen to be on TV for no reason other than the fact that they're average schlubs. Sure, watching some of these train wrecks known as people might make us feel better about ourselves, since we can make a judgement call about our self-worth versus theirs. This same philosophy applies to the grinders, but we're not building ourselves up at someone else's expense when we cheer an Adam Cracknell goal. We're doing something much more worthwhile -- we're realizing what we're capable of through watching what he's achieved.

Isn't genuine happiness at watching someone do something they've always dreamed about so much better than pointing and laughing at someone to make ourselves feel better? Hockey's a noble sport, and cheering on the grinder is one of the most noble of pursuits that you can have.