Share All sharing options for: Lighting the Lamp: Vancouver Canuckleheads

Like the Blues, the visiting Vancouver Canucks have never sipped the nectar of the hockey gods, champagne from the Stanley Cup bowl) and anything less will be seen as a failure by their rabid fans. It has always been like that in hockey-mad Vancouver. Even though this year's edition leads the Northwest Division, the fans are unhappy with an under-performing team and the goaltending "problems" concerning having both Roberto Luongo (and his contract, which even he says sucks) and Corey Schneider on the club.

However, that does not mean a hockey team from Vancouver has never won the Cup. In 1911, Frank (HHOF 1950) and Lester (HHOF 1947) Patrick formed their own professional league, the Pacific Coast Hockey Association, featuring three teams, one of which was dubbed the Vancouver Millionaires. (The Canucks issued and wore a commemorative jersey this season to honor the Millionaires.) The Patrick brothers from Quebec, who had both played for the Renfrew (Ontario) Millionaires, lured professional players from the National Hockey Association (precursor to the NHL). Frank, who incidentally invented the blue line, the penalty shot and the tradition of raising the stick after scoring a goal, managed to sign Cyclone Taylor, a top scorer and star in the NHA, instantly giving credibility to his new franchise. By 1914, the NHA and PCHA worked out a deal in which the respective league champions would meet for the right to drink out of Lord Stanley's Cup. Led by Taylor and Patrick, the Millionaires swept the Ottawa Senators, outscoring the eastern champions 26 to eight in three games. Taylor had six goals in the three games. Lester Patrick went on to play for, coach and manage the New York Rangers, winning Cups in 1928 and 1933.

From their inception, the Canucks have had bad fortune and have managed to make the Cup Finals only three times (the same as the Blues) in their 42 year history, the most recent two years ago against Boston. As an expansion team, Vancouver lost the draft lottery to the Buffalo Sabres, their birth-mates, in both the amateur and expansion drafts of 1970. The amateur draft saw Buffalo take HHOF nine-time all star Gilbert Perreault, while the Canucks chose defenseman Dale Tallon, later traded to Chicago after only three years. Tallon is currently the GM of the Florida Panthers. Although choosing second, Vancouver GM Bud Poile chose wisely in the expansion draft, choosing tough center Orland Kurtenback, the first to wear the captain's "C", defenseman Pat Quinn, later Canuck coach and GM, respected defenseman Gary Doak, forwards Ray Cullen, ex-Blues Andre Boudrias and Wayne Maki and goaltender Charlie Hodge. 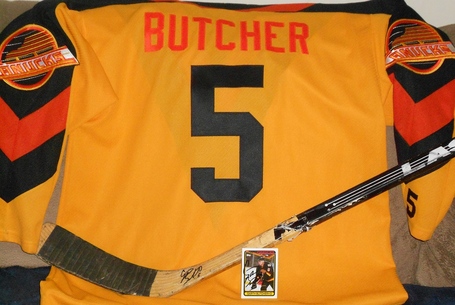 Vancouver struggled early on, only qualifying for the playoffs once in the first seven years. it wasn't until 1982 that they made a serious playoff run, with legendary coach Roger Neilson leading the way. During the Conference Finals against Chicago, Neilson, frustrated with what he felt was poor, inconsistent officiating (sound familiar 31 years later?), wrapped a white towel around a hockey stick and held it up in a gesture mocking surrender to the referee and linesmen. So did his players. At the very next game, the fans joined in, waving white towels, which started a tradition that has been copied around the league and even in other professional sports across the world. And, yes, they won that series and went on to the Finals, only to lose to the defending champion New York Islanders. Vancouver would not win another playoff series for over ten years.

The 1994 playoffs were the most illustrious in Canucks' history. In the first round against the Flames, Vancouver rallied from a three-games-to-one deficit to win the series in game seven in Calgary. Games five through seven were all won in overtime on goals by Geoff Courtnall, Trevor Linden and Pavel Bure. In the first overtime of game seven, Canucks' goaltender Kirk Mclean made what was called "The Save", sliding across the crease feet-first, stacking the pads to rob Robert Reichel on a pass from Theo Fleury. In the second overtime, Bure got a break-away pass from former Blues' defenseman Jeff Brown before deking the Flames Mike Vernon to score and win the series. Those two plays would be chosen later as the two most memorable moments in Canucks' history by the Vancouver Sun. The Canucks would go on to lose game seven of the Finals to the New York Rangers. Riots in Vancouver after the loss caused massive property damage, over 200 injuries and dozens of arrests.

It's rather distressing to realize that as the Blues' defense, now ranked 13th in the league, improves, including penalty killing, ranked seventh, the offense, now ranked 14th, has fallen drastically, including the suddenly impotent power play, now ranked ninth after being number one for most of the shortened season. St. Louis has only scored 29 goals in the last 15 games, although they did win nine of those contests, mostly due to the improved defense. Perhaps the Blues should be re-named the St. Louis Rollercoasters due to all the ups and downs they have provided as the playoffs approach.