The season's almost done, and the Coyotes are on the outside looking in. Will the Blues prove to be one of the last nails in their coffin? 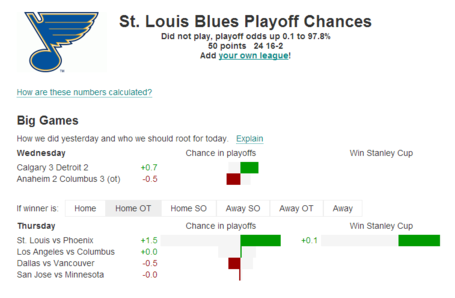 Thanks for the solid, Calgary! Much appreciated. Right now the Blues are at almost 98% certainty of making the postseason, which is great since the team's putting round one and two tickets on sale on Tuesday. If the Blues want to get to 100% certainty by then, winning tonight's tilt against the on-again, off-again Coyotes would be a good start.

Tonight's game probably won't have the intensity of Tuesday night's, since David Backes probably won't be in a full "kill the other team" berserker mode. But still, if the Blues keep playing with motivation, it might not matter if tonight's game is low scoring or not. As long as they score more than the other guys is all that matters.

This is your game day thread. Enjoy some springtime hockey and watch out for nasty weather (The Weather Channel app told me you guys were getting popped with some rain and storms). Let's do this.

Coyotes At Blues Gameday Storystream: Do It Again - Win