The Blues are starting a new consecutive playoffs streak this season, as their 3-1 win over the Colorado Avalanche secure a spot in the top eight.

We all knew that they were going to do it; it was just a matter of when. Sunday night? No. Tonight in front of their home team? Absolutely, and frankly, if you know that they're going to make the playoffs, wouldn't you rather have them do it it Scottrade? I would.

With 54 points, the Blues have clinched a playoff spot for the second season in a row. Sure, the point total isn't impressive, but if you do some terrible math and just multiply that point total by two, that gives them 108 points, just one off of their total for last year. I know that's not how it works, but work with me on this.

Tonight's game was courtsey of goals by Chris Stewart, Patrik Berglund (both on the power play! In the same game!) and Vladimir Tarasenko. The Blues almost doubled up shots on the Avs 34-18; Semyon Varlamov got minimal support tonight from his team.

Brian Elliott, though, shone once again, allowing just one goal on 18 shots. The Blues' defense, with the exception of Sunday night's game, has been solid in holding off quality shots for the opposition, and that has really helped Elliott have a career month.

Of course, this win tonight broke Jay Bouwmeester's streak. Not the iron man one, but consecutive games without making the playoffs. Being on some pretty bad teams for those years didn't help Bouwmeester; one can imagine that making the playoffs was like a rock being lifted from his shoulders. Welcome to the big show, JBo.

Win or lose in these next two games, well... 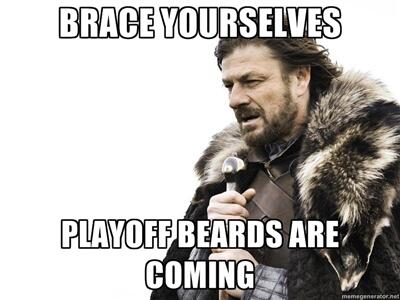 Very much hoping that we can see them in full glory after more than two rounds. The regular season's not over yet, though. The Blues still have a chance, though not a huge one, for home ice advantage. Here's hoping that Barret Jackman will be able to help the Blues secure that. Jaxx left in the second period and didn't return to the game, and no one immediately after the game seemed to know why. If anyone has an update, leave it in the comments.